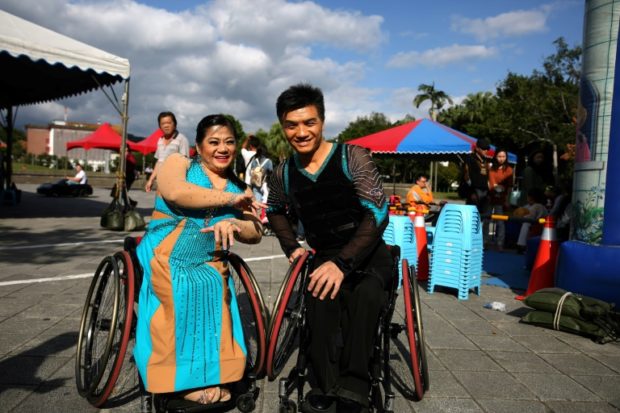 Ivy Huang (left) and Vincent Kuo (right) are part of the island’s last generation of polio survivors and have spent years perfecting their dance routines.  | AFP

TAIPEI — Athletes Vincent Kuo and Ivy Huang each discovered an electric talent for wheelchair dancing on their own. But it was when they were paired up together that sparks really flew.

Currently ranked world No. 2, the recently married couple are in Germany this weekend to compete in the World Para Dance Sport Championship.

“I have always been interested in sports even if I can’t play them because of my disabilities,” Kuo told Agence France-Presse (AFP) during a break from practicing Latin dance moves with his wife in New Taipei City.

Around 50 wheelchair dancers across Taiwan meet regularly to exercise and socialize, including Kuo and Huang, both 48.

Their dance partners are nondisabled volunteers who either perform standing up— a style known as “Combi”—or also using a wheelchair, called “Duo.”

“Through dance, we got to know a lot of good friends,” Huang said. “Especially after a performance we’ll get together and have a feast, and be very happy.”

Huang and Kuo, who can walk with the help of crutches but use wheelchairs for dancing, attended these meetings for more than a decade before they started performing together and eventually fell in love.

Huang said it was Kuo’s sense of humor that caught her attention.

“He was always funny when he spoke,” she said.

“My first impression of Ivy was that she was very cute because she walks like a penguin,” Kuo added, the pair bursting into laughter at the description.

The couple has been practicing for months after work for the impending competition in Bonn, where they will join 230 athletes from 26 countries in the sport’s marquee event.

Kuo and Huang will both compete in the Duo category. Kuo will also compete in Combi with Lydia Chang, a nondisabled dancer and the team coach.

Many of their opponents are from teams with much more funds.

“Europe has the best dancers, and in Asia there is South Korea,” Chang said. “But we owe it to ourselves to go, to see what we can achieve.”

Huang, who works for Taipei’s city government by day, says she fears a future when dancing may not be possible.

“For us polio patients, physical deterioration can happen quite quickly,” she said. “We are hoping while we can still dance … to hold on to our good rankings.”

From Sweden to Taiwan

The first world championship was held in Japan in 1998. Taiwan hosted the first ever Asian championship in 2016.

Since then, the annual Beigang Para Dance Sport Open in central Taiwan has attracted competitors from more than 18 countries and raised Taiwan’s profile in the international arena.

“Technique-wise, we are on par with the rest of the world,” said Tsai Hsiu-Hui, who was one of the island’s first wheelchair dance instructors.

“But we tend to be more reserved in showing our emotions … especially Latin dance [where] we need to display our feelings,” Tsai added.