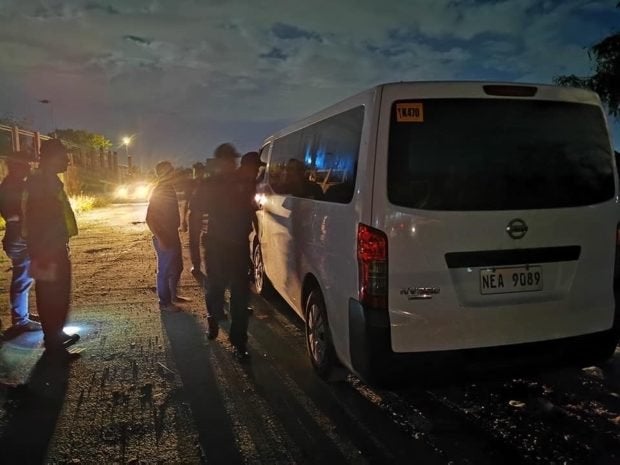 Police investigate the white van where the corpses of two men were found in Cavite. Photo by Ross Calderon, Contributor

SAN PEDRO CITY –– Two men were found dead inside a van abandoned in a vacant lot in Noveleta town in Cavite province.

Cavite police director Col. Marlon Santos, in a text message Saturday, said the bodies were on their “initial stage of decomposition” when found.

He said the bodies were tied and their heads wrapped in packaging tape.

Santos said a resident, around 5:30 p.m. Friday, sought help from the police after he noticed the van, a white Nissan Urvan with plate number NEA9089, abandoned in Barangay San Rafael 4.

What drew his attention, even more, was the blood dripping out of the vehicle and the foul smell coming from it.

Police were verifying the identities of the victims, although the report said they recovered two driver’s licenses that belonged to Ronan Muji of Pola town and Miguelito Estrera of Bansud town, both in Oriental Mindoro province.

Photos of the vehicle uploaded by residents had been circulating on social media amid hysteria about a supposed “white van” snatching children from the streets.

Authorities had never confirmed such incidents as real./lzb