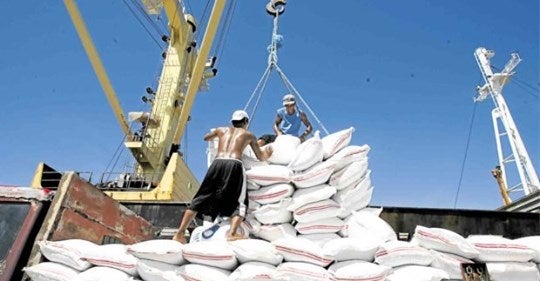 Collections from the tariffs slapped on imported rice reached P12.3 billion last year, exceeding the P10 billion to be spent yearly on programs that will support farmers disadvantaged by liberalized trade, the Department of Finance (DOF) said.

In a statement Friday, the DOF said the additional revenues from the implementation of the Rice Tariffication Law since March last year surpassed the amount to be allotted to the annual Rice Competitiveness Enhancement Fund (RCEP), which was aimed at modernizing the agriculture sector as well as equipping farmers with modern technologies, easier access to cheap credit, high-quality seeds and skills development.

Under the Rice Tariffication Law or Republic Act No. 11203, the following tariff rates apply: 35 percent if rice is imported from Asean; 40 percent if within the minimum access volume (MAV) of 350,000 metric tons from countries outside Asean, and 180 percent if above the MAV and coming from a non-Asean country.

From the funds in excess of the yearly RCEF allocation, the government will also give away direct cash assistance to farmers in most-affected areas where palay prices fell as a result of the entry of cheaper imports.

Liberalized rice trade was also expected to narrow the national government’s subsidies to the state-run National Food Authority (NFA), which had regulated importation.

The Rice Tariffication Law had taken away the NFA’s commercial functions and regulatory powers, only retaining its emergency buffer-stocking mandate.

DOF Undersecretary and chief economist Gil S. Beltran said subsidies to the NFA totaled P187 billon between 2005 and 2015 or an average of P19 billion a year.

On top of the financial gains to the government, the Rice Tariffication Law also helped slash rice retail prices by an average of P8 a kilo, helping bring down the inflation rate to within the government’s 2-4 percent target range.

For the entire 2019, headline inflation averaged 2.5 percent, the lowest in three years or since the 1.3 percent posted in 2016.

In 2018, inflation hit a 10-year high of 5.2 percent in 2018 due to skyrocketing global oil prices, new or higher excise taxes slapped on consumption under the Tax Reform for Acceleration and Inclusion (TRAIN) Act and domestic food supply bottlenecks, especially of rice.

However, the DOF admitted that “as with any reform that involves radical change, the Rice Tariffication Law also brought short-term transition challenges such as the drastic drop in palay farmgate prices in several areas.”

The DOF blamed “unscrupulous traders” who had “either over-imported and hoarded rice or brought warehouse space even without storing anything in them to pressure farmgate prices downward.”

“The DOF and DA have responded swiftly to this challenge by implementing the expansion of the Survival and Recovery or SURE-aid program, which allows affected farmers to avail themselves of a P15,000 interest-free loan payable over eight years,” it said.

Through the so-called “strike teams” of the bureaus of Customs (BOC) and of Internal Revenue (BIR), the DOF-attached agencies had also been investigating reports of rice hoarding and smuggling.