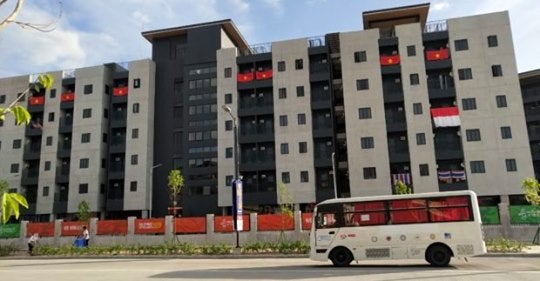 CLARK, PAMPANGA – Health workers from all over Central Luzon have been mobilized to assist 45 Filipinos who will be flown back from Wuhan City in China and quarantined for 14 days on Sunday (Feb. 9) at the Athletes Village of the New Clark City in Tarlac province.

Medical workers from five hospitals have been deployed to the sports facility, along with a mental health team from Mariveles town in Bataan province, to take care of the Filipinos, who resided in Wuhan where the 2019-novel coronavirus first emerged, said Health Undersecretary Gerardo Bayugo during a Feb. 8 briefing.

Bayugo spoke prior to the 10:15 p.m. flight of members of the Health Emergency Response Team (HERT) from the Clark International Airport (CRK) to Wuhan. The team would fetch the Filipinos, who have not shown symptoms of 2019-nCoV but who are required to be isolated for two weeks. Among them is an infant, said Foreign Affairs Undersecretary Sarah Lou Arriola who handles the agency’s office on migrant workers’ affairs.

The HERT will be accompanied to the Tianhe International Airport by a five-man medical team deployed by the Department of Health. About 36 Filipinos are currently waiting there as of posting time.

The team is expected to land in China at 1:15 a.m., stay for 45 minutes then will fly back to the country, Arriola said. The Filipinos are expected to be at CRK by 5 a.m. on Sunday. A heavily tinted bus will ferry them to New Clark City in the Tarlac town of Capas, according to Dr. Janet Lazatin, Tarlac Provincial Health Officer.

The crew who manned the flight will also be subjected to the 14-day quarantine period.

“We have asked them for information regarding their food allergies, medication requirements, and their meal preferences. Their packed meals will be sent there three times a day,” said Bayugo.

While on the plane, the Filipinos would undergo three levels of medical screening, so anyone showing nCoV symptoms would be separated and sent to the designated hospitals as soon as the aircraft lands, he said.

Each of the repatriated Filipinos would be given their own rooms at the sports facility, and would be allowed to keep their mobile telephones. They may contact their families, Bayugo said, but have been discouraged from using their telephones to complain about their circumstances.

Read Next
2nd Filipino nCoV case is in Dubai