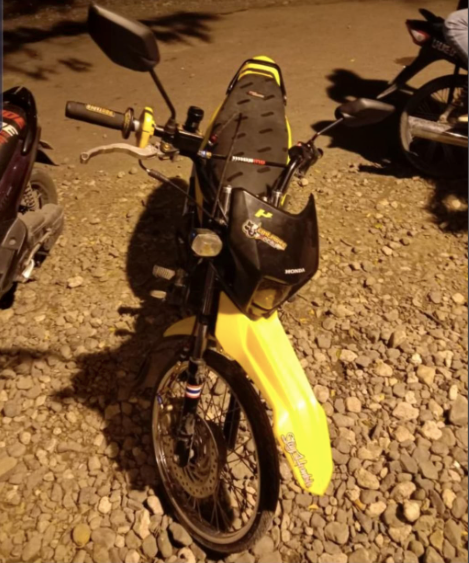 This is one of the motorcycles which has been recovered by the Highway Patrol Group in Central Visayas (HPG-7), during the arrest of suspected motorcycle thief in Barangay Mambaling, Cebu City on Thursday, February 13. | Photo courtesy of HPG-7

CEBU CITY, Philippines — Riders, who lost their motorcycles to three suspected thieves operating in northern Cebu, are encouraged to visit the Highway Patrol Group’s office at Camp Sotero Cabahug along Gorordo Avenue and file charges against the culprits.

Police Captain Michael Gingoyon, Highway Patrol Group (HPG) Cebu province chief, made the call in a press briefing on February 14, after they arrested the suspects a day before on Thursday, February 13.

Gingoyon said that they were calling on riders or people who were victims of these motorcycle thieves to come forward and file a case against this allegedly “notorious motornapper” and his two cohorts.

BAtajo, was arrested during the follow-up operation of the HPG-7 in his home on Thursday, February 13, 2019 at around 11 p.m.

His cohorts, Ejiram and Amat were first arrested earlier in the day in an entrapment operation in Colon Street.

According to Gingoyon, the three suspects had been moving as a group and were targeting the areas in Consolacion, Liloan and Compostela.

Batajo was positively identified as the “motornapper” while the two others act as the lookouts and the sellers of the stolen motorcycles online.

With the recent arrest of the motorcycle thieves, Gingoyon warned the public to be more careful on where they park their motorcycles as there might still be other groups like Batajo’s group.

The three suspects will be facing a case for violating Republic Act (RA) 10883 or the anti-carnapping law and Presidential Decree 1612 or the anti-fencing law./dbs