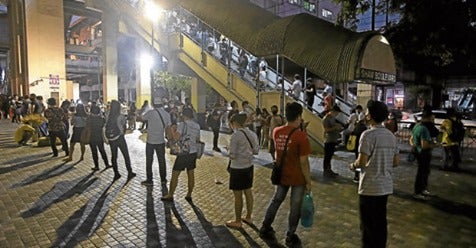 Countries like the Philippines, where COVID-19 cases have yet to make it past the first wave of infections, needed to be more cautious before further easing restrictions on movement of people, UK-based think tank Oxford Economics said on Friday.

“A prolonged first wave or a second wave is more likely in regions that ease restrictions too quickly. In Brazil, the US, India and the Philippines, which are still in the middle of a first wave, easing of restrictions risks pushing the peak further out and making the wave bigger,” Oxford Economics economist John Payne said in a report titled “The two-stage recovery is poised on a knife-edge.”

At the height of the ECQ, 75 percent of the economy ground to a halt—resulting in millions of workers temporarily unemployed and in a recession.

With most parts of the country currently under a less-restrictive GCQ, only 25 percent of economic activities remained banned.

“We are also concerned that a quick easing of restrictions will lead to a renewed spike in infections in India, the Philippines and the US,” Oxford Economics said.

For Oxford Economics, “pressure to prioritize ‘economy over health’ that results in lockdowns being eased too fast and too soon is a clear risk” worldwide.

Risk of a second wave

In the Philippines, officials earlier said that health had been prioritized over the economy as the government scrambled to establish additional medical and quarantine facilities during the lockdown to better respond to the pandemic.

While some countries have already dismantled their lockdowns, Oxford Economics warned that “a second wave of infections is the key risk.”

In a separate report last Wednesday titled “Plotting recovery paths,” Oxford Economics head of India and Southeast Asia economics Priyanka Kishore and economist Thatchinamoorthy Krshnan placed India, the Philippines and Indonesia at the bottom of the pack in the region in its recovery scorecard.

“All three are clearly still struggling to get past the peak of the pandemic, which is a major headwind to their outlooks. At the same time, the fiscal policy response has been quite meager in both India and Philippines, especially compared to the stringency of lockdowns they had imposed—which at one point were not only among the most severe in Asia but also globally,” Oxford Economics said.

The latest update to the Manila-based multilateral lender Asian Development Bank’s COVID-19 policy database showed that the Philippines’ war chest against the pandemic remained at $20.078 billion as of June 15, or above the P1-trillion mark, equivalent to 5.46 percent of gross domestic product.

If the Philippines’ economic measures to fight COVID-19 were divided among the population, the package per capita was $188.26 or over P9,400 for every Filipino.

Read Next
Another COVID-positive cop dies in Cebu