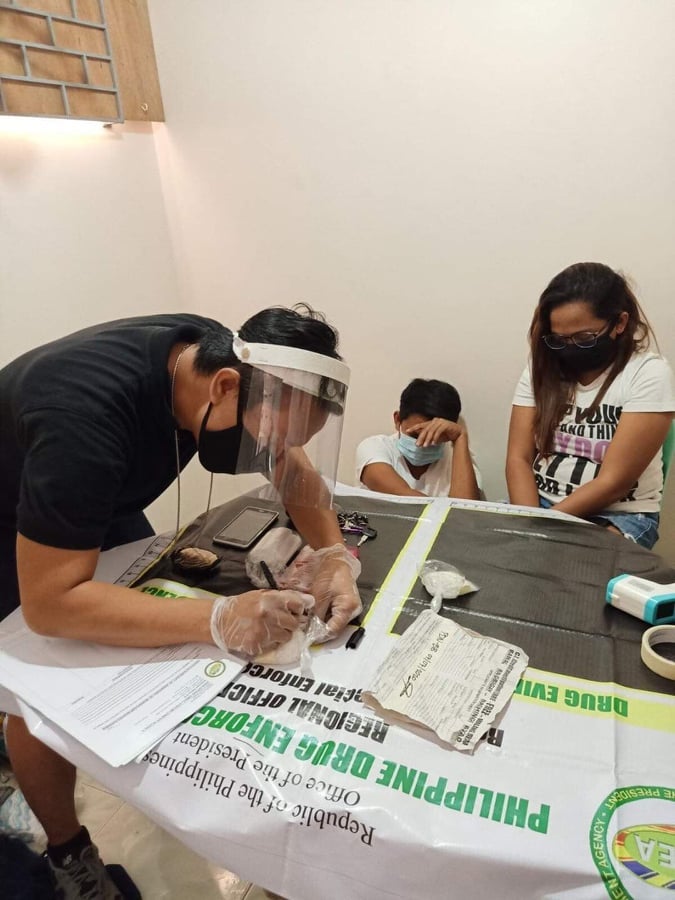 Two of the suspects in a buy-bust operation of the Philippine Drug Enforcement Agency in Central Visayas (PDEA-7) on Tuesday, July 7, 2020, is seen in this photo provided by the PDEA-7.

CEBU CITY, Philippines — Two buy-bust operations conducted by the Philippine Drug Enforcement Agency in Central Visayas (PDEA-7) in Barangays Lahug and Sambag 1 on Tuesday, July 7, 2020, led to the arrest of three suspects and confiscation of P1 million worth of suspected shabu.

The suspects were identified as Jereme Sanchez Duran, 38; Jorda Fiel Miral, 31, and Romualdo Bijasa Jr., 36, who were all originally from Barangay Ermita here.

The three were arrested separately, with Duran nabbed in Sitio Sun-oc in Barangay Lahug at around 10 a.m. and Miral and Bijasa arrested in Barangay Sambag 1 at around 3 p.m.

Confiscated from Duran were 50 grams of suspected shabu worth P340,000 while 100 grams worth an estimated P680,000 were found in the possession of Miral and Bijasa.

The two separate busts, thus, yielded a total of P1,020,000 worth of suspected illegal drugs.

PDEA-7 director Levi Ortiz told CDN Digital in a phone interview that when Duran was arrested, he disclosed that his shabu supplier was Miral, which prompted for the followup operation and her arrest together with common-law husband Bijasa.

According to Ortiz, the three belong to one group of illegal drug traders in the city.

“We received information about their distribution from concerned citizens, [this] led to the success of the operation,” said Ortiz.

As of this time, the three suspects are detained at the PDEA-7 facility in Sudlon, Barangay Lahug pending the filing of charges. /bmjo