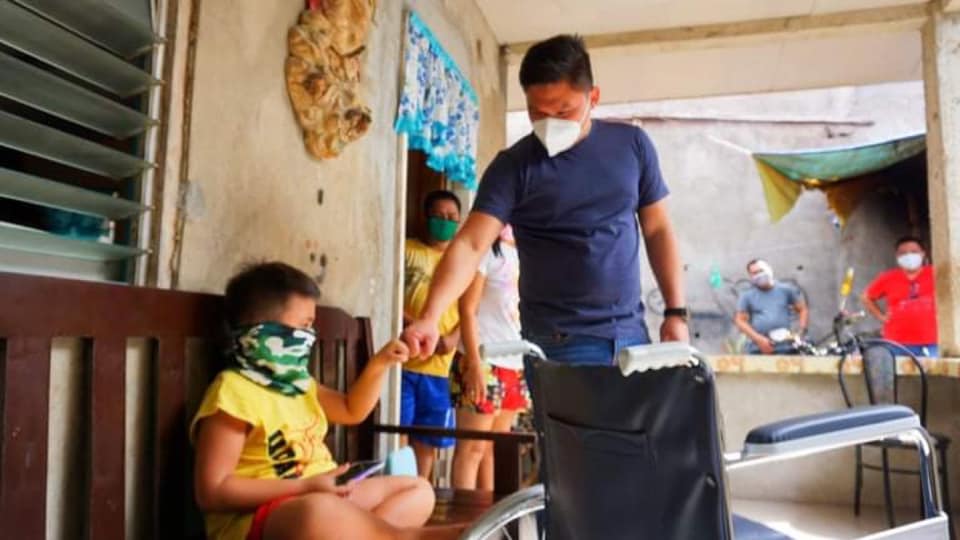 CEBU CITY, Philippines — The Talisay City government gave out three wheelchairs to persons with disability (PWDs) living in the city after these three individuals sought the assistance of the city government.

Mayor Gerald Anthony “Samsam” Gullas led the distribution of the wheelchairs to the three PWDs living in Barangays Maghaway, Jaclupan, and San Isidro.

One of the beneficiaries is the barangay councilor of Barangay Maghaway, who suffered a stroke last December and lost control of her legs.

Barangay Councilor Mary Jean Luaña said she wanted to continue serving her barangay despite her disabilities.

“When we visited her today, the city brought her a brand new wheelchair which she can use. I hope the wheelchair the city provided can help Kons. Luaña literally get back on her feet,” said the mayor.

He is suffering an inborn congenital disease that causes seizures every now and then. The child told the mayor he wanted to play with the kids around his neighborhoods but could not because of his condition.

The mayor promised that the city government would also provide free medicine to John Terrence aside from the wheelchair.

“Sakit pamalandungon nga gihatagan kaning bataa ug grabe nga kasinatian. (It hurts to see that the child is suffering). We also told his family that if they needed anything to help with John Terrence’s condition, the city is open to assist them,” said Gullas.

The last beneficiary is a diabetic patient who lost her right leg due to complications. Editha Dela Calzada of Barangay San Isidro received a wheelchair she could use to go around again.

Gullas said the city would continue to find ways to help the underprivileged constituents of the city as much as they could.

Residents, who need help or who know someone who desperately needs help with their living conditions. may seek the help of the city government.

“Even with the ongoing COVID-19 pandemic, our administration will continue to provide assistance for our constituents. Rest assured, andam muabag ang lokal nga kagamhanan sa Talisay (the Talisay city government is willing to help the residents),” said the mayor./dbs