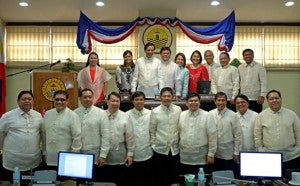 Councilors allied with the Bando Osmeña-Pundok Kauswagan (BO-PK)  said they will continue to fiscalize every proposed measure as well as scrutinize projects and transaction entered into by the Rama administration.

Councilor Margot Osmeña, wife of former mayor and BO-PK titular head Tomas Osmeña, said it has always been the policy of the City Council  to look into how much money the city government  is capable of raising before they decide on what projects and programs to approve for implementation.

Osmeña said the councilors have Cebu City’s best interests in mind when deciding on budgetary appropriations.

In his State of the City Address (SOCA), Mayor Michael Rama identified 16 priority projects that his administration plans to pursue.

The second-term mayor said City Hall has to prepare for projects like the roll-out of the nationally-funded Bus Rapid Transit (BRT) and the hosting of the  Asia Pacific Economic Cooperation (Apec) summit  next year and the International Eucharistic Congress in 2016.

Rama said the city government needs P800 million for the rehabilitation of its traffic system alone while he wants more closed-circuit television cameras  installed on the city’s streets for traffic and peace and order  monitoring. He also asked the city council to support his request to fund the acquisition of equipment for the city’s police force.

Rama said he would also present to the City Council  his proposed second tranche of the  Supplemental Budget  which  would include additional funding requests for the  Cebu City Medical Center (CCMC) reconstruction project.

There are also projects that the mayor wants funded in the 2015 budget.

“It’s hard for us to pass a budget without knowing if the city has the cash so we have to look for the source of funds,” Wenceslao said.

Read Next
DOT to pay for shipment of Lapu statue