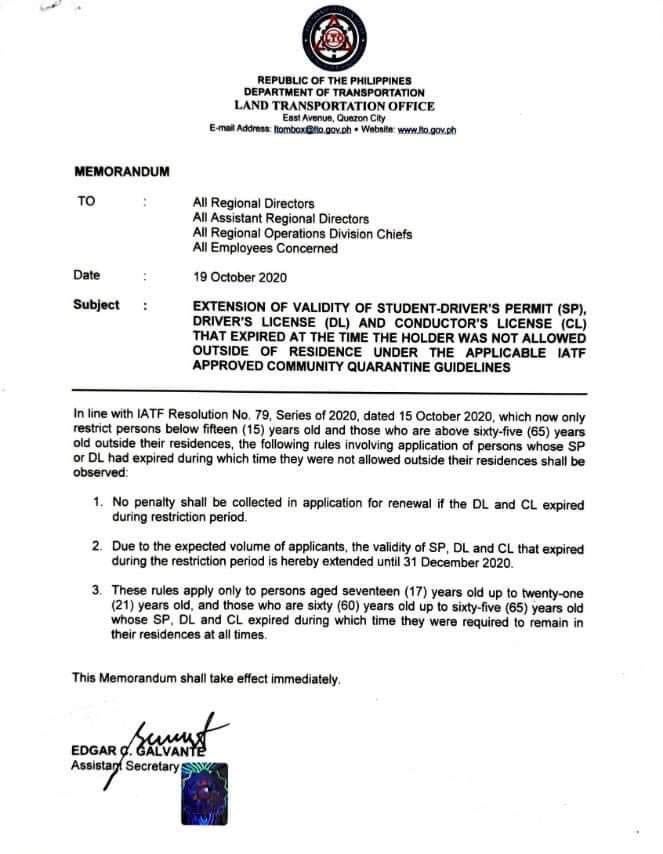 CEBU CITY, Philippines — The Land Transportation Office (LTO) has extended the validity of student-driver’s permits, driver’s license, and conductor’s license to December 31, 2020, only for those age groups that were not allowed to go out during the community quarantine.

In a memorandum released to regional offices,  the LTO said no penalty shall be collected for permits and licenses issued to those below 21 years old and from 60 to 65 years old which expired within the quarantine period from April to October 2020. The said memorandum shall take effect immediately.

These age groups have not been allowed to leave their homes during the various community quarantine, making it impossible for them to process the renewal of their documents.

“Due to the expected volume of applicants, the validity of SP, DL, and CL that expired during the restriction period is hereby extended until 31 December 2020,” read the said memorandum.

The said age group shall incur no penalty in renewing their licenses.

“This is really good news for everyone. Since the IATF made the move of allowing restricted age groups to go out of their houses, they now have the chance to process their expired licenses or permits in our offices,” said Caindec.

“We must remember that the virus is still there, quarantine remains but more people are now allowed to go out, your LTO offices are strictly observing the minimum health protocols, we urge the transacting public to always wear your face mask and face shield inside our offices,” he added.

This is the second time the LTO extended the validity of the permits.

On September 25, 2020, LTO first extended the student-driver’s permit of persons aged 20 but turned 21 during restrictions until October 31.