Trump – for a moment – alludes to election defeat 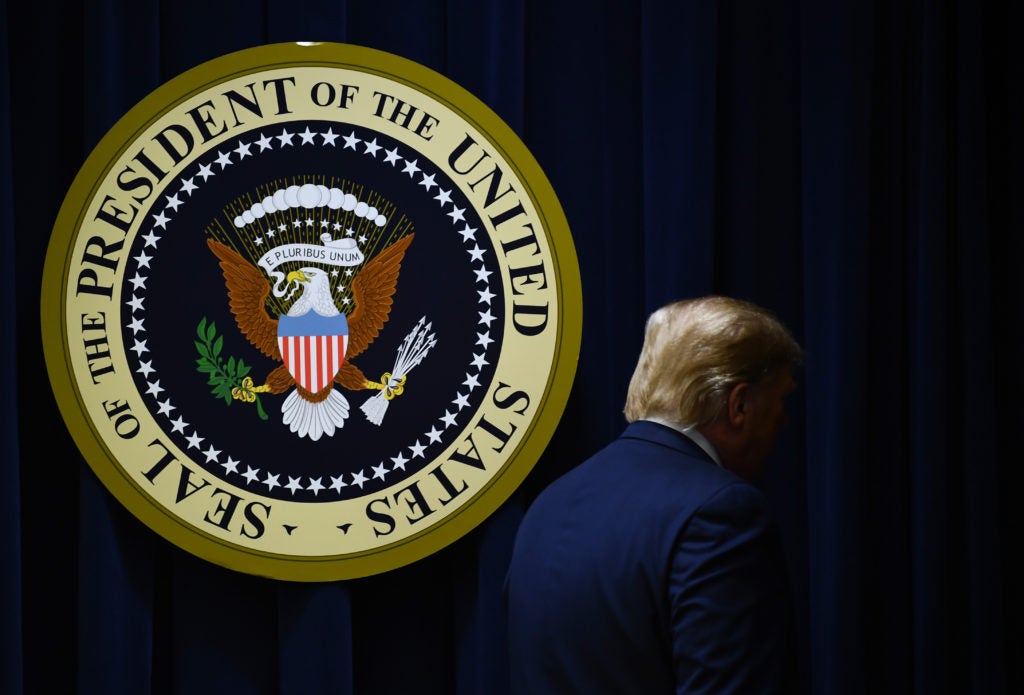 In this file photo taken on December 19, 2019, US President Donald Trump leaves after speaking at summit on transforming mental health treatment to combat homelessness, violence and substance abuse at the White House in Washington, DC. – President Donald Trump appeared to edge closer towards acknowledging his election defeat in a tweet on the morning of November 15, 2020, as he again railed against supposed mass fraud in the vote won by challenger Joe Biden. “He won because the Election was Rigged. NO VOTE WATCHERS OR OBSERVERS allowed, vote tabulated by a Radical Left privately owned company,” Trump tweeted in his clearest yet admission of defeat. | Photo by Brendan Smialowski / AFP

Washington, United States—President Donald Trump has yet to admit defeat in the US election. But with a word here, a slip there, he is raising the prospect ever more plainly.

“He won because the Election was Rigged,” Trump tweeted.

The first two words — coming days after a verbal slip in which Trump said “time will tell” if he remains president — were immediately seized upon as one more step towards a concession.

But the president soon made a U-turn, tweeting: “He only won in the eyes of the FAKE NEWS MEDIA. I concede NOTHING! We have a long way to go.”

Senior federal and state election authorities, including a top cybersecurity agency and 16 federal prosecutors assigned to monitor the elections, have rejected claims of widespread election tampering.

Still, Trump continues to insist he will prove fraud and prevail in court.

Meantime, the leaders of nearly every country in the world have congratulated Biden on his victory, reinforcing the notion that almost no one — in the United States or elsewhere — is taking the Trump legal challenges seriously.

Those challenges have been nearly universally dismissed by judges as unfounded. On Sunday, Trump insisted that “many” of them had not been filed by his team, and that his “big cases… will soon be filed.”

Reacting to Trump’s initial tweet, Biden’s newly named chief of staff Ron Klain told NBC’s “Meet the Press” that it was “further confirmation of the reality that Joe Biden won the election.”

Biden himself met Sunday in his hometown of Wilmington, Delaware with his transition advisors, his spokespeople said.

Some Trump administration officials say privately that they understand that Biden won, but that the president needs time to “process” his loss.

Others, on the outside, speculate Trump may be trying to galvanize his base to back some future commercial or media endeavor or even to support a new run for office in 2024.

Until now, the president has refused to cooperate in the shift to a Biden administration — denying the Democrat both federal funding for transition work and vital briefings by outgoing officials.

Democrats say this could have a damaging impact both on national security and on the grave and mounting challenges posed by the coronavirus, with cases soaring past 11 million since the start of the pandemic Sunday — one million of those in the last six days alone.

“Joe Biden’s going to become president of the United States in the midst of an ongoing crisis,” said Klain. “That has to be a seamless transition.”

For now, he said, Biden and his team are not even allowed to consult with someone like top government immunologist Anthony Fauci.

“Of course it would be better” if such talks could begin, Fauci told CNN on Sunday, noting that the virus could kill tens of thousands more Americans by the time Biden takes office on January 20.

Millions of people would believe there was fraud — because the president said so — in a development corrosive to democracy, he added.

A small but growing number of Republican figures have begun pressing for Trump to concede, including former Trump national security advisor John Bolton, a critic of the president since leaving the administration.

He told CNN it was crucial for more Republicans to persuade Trump that he had lost in a fair election.

Persuading those who voted for Trump may be a different matter.

More than 10,000 Trump supporters rallied in Washington on Saturday to back his claims of fraud — massing in Washington’s Freedom Plaza before marching to the Supreme Court in a raucous atmosphere.

At least 20 people were arrested after skirmishes erupted, reports said, including four for firearm violations and one for assault on a police officer.

Trump himself made a drive-past of the rally in his armored motorcade, on his way to play golf, smiling through his limousine window to wild cheers.

Read Next
Fair weather to prevail in Cebu