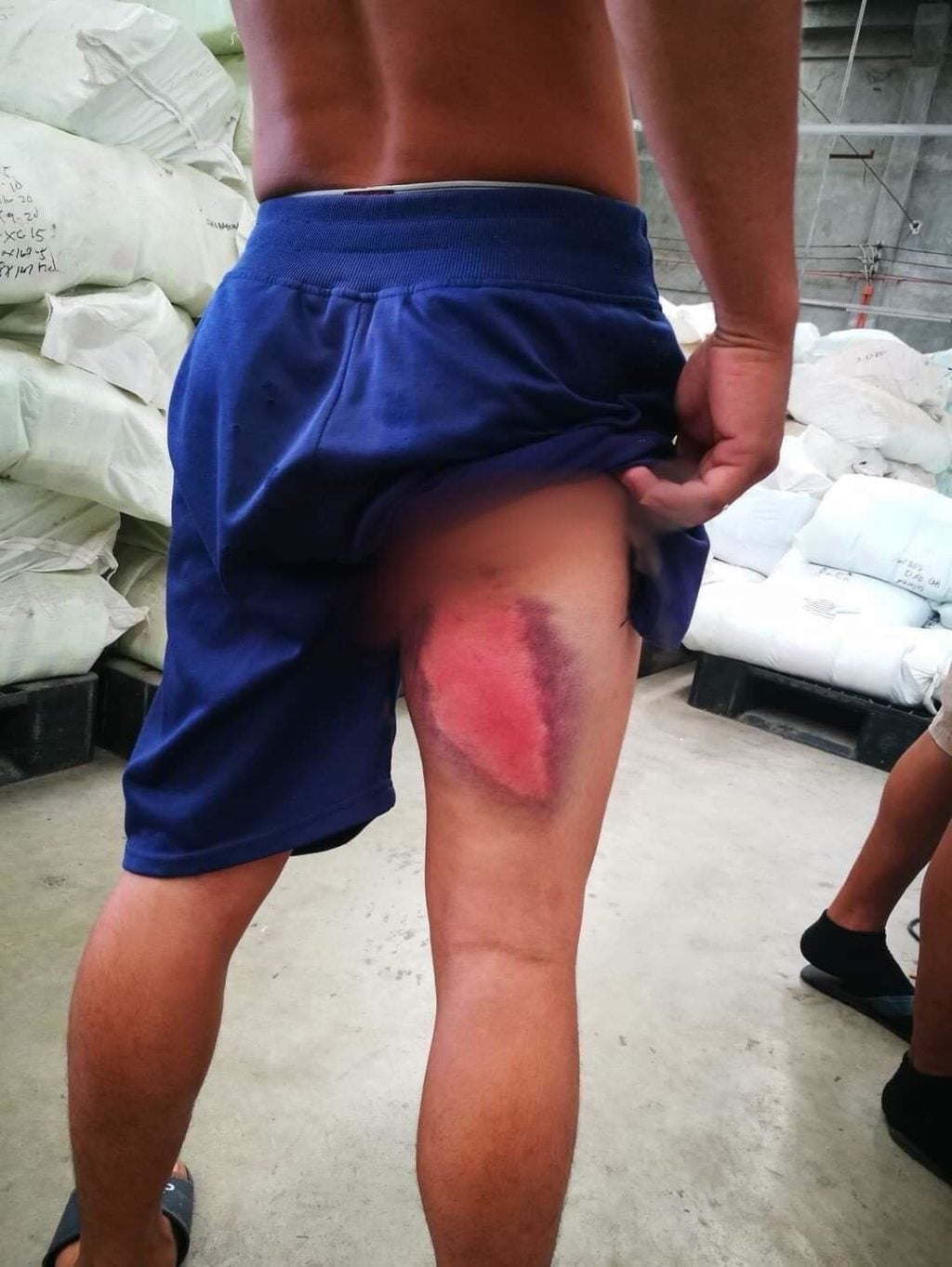 A porter at the Carbon Market shows a large bruise on his right thigh allegedly inflicted by Police Station 5 cops as punishment after he was caught not wearing a face mask while resting inside the city’s biggest wet market.

CEBU CITY, Philippines — A Carbon Market porter claimed to have been paddled by the police for violating health protocols on February 8, 2021.

The porter, who created an anonymous account on Facebook with a tag of Aiko Ylara went viral for his post on Tuesday, February 9, 2021, admitted he was not wearing a face mask while resting from carrying various types of load in the market, which led to his arrest.

He said he understands the reason why he was apprehended and brought to prison.

He claimed that he was paddled three times which led to a bruise at the back of his thigh rendering him unable to work in the past two days.

The porter added that at least 10 individuals were also paddled by the police, but are afraid to complain because they have violated the health protocols themselves.

Meanwhile, Police Colonel Josefino Ligan on Wednesday, February 10, has ordered the relief of the concerned policeman whom he did not identify.

Ligan said this practice is not sanctioned or condoned by the police and he assures the public that they will get to the bottom of the incident.

An ambulant vendor in Carbon Market, who asked to remain anonymous, told CDN Digital in a text that they have experienced a similar incident last January 2021 still in the same police station.

The vendor said they wanted to complain to the Market Operations Division (MOD) but hesitated since they violated the protocols themselves.

He did not reveal if he was paddled as well but claimed to have been physically hurt by the police.

In a phone interview with CDN Digital, Market Head, Irvin Cabales said that physical punishment is never a sanction for violation of health protocols.

He added that he will wait for the results of the investigation to know what really transpired and if human rights were actually violated by any enforcer.

The Market Head assured any worker of the market that the city government will help those who have complaints of maltreatment by authorities.

The MOD said it is willing to assist those who want to file complaints but are not sure where to file them.

Councilor Philip Zafra, the city council’s chairperson of the committee of peace and order, said the incident must never be condoned, and an investigation must be properly conducted as well.

“Even the officials of the CCPO would not condone that kind of action. Dili gyod maayo. Currently, I was informed by CCPO that they are conducting an investigation, rest assured investigation is underway. If the allegations are true there may be human rights violations,” said Zafra. /rcg

Read Next
Gonzaga sisters did ‘it’ in Amanpulo