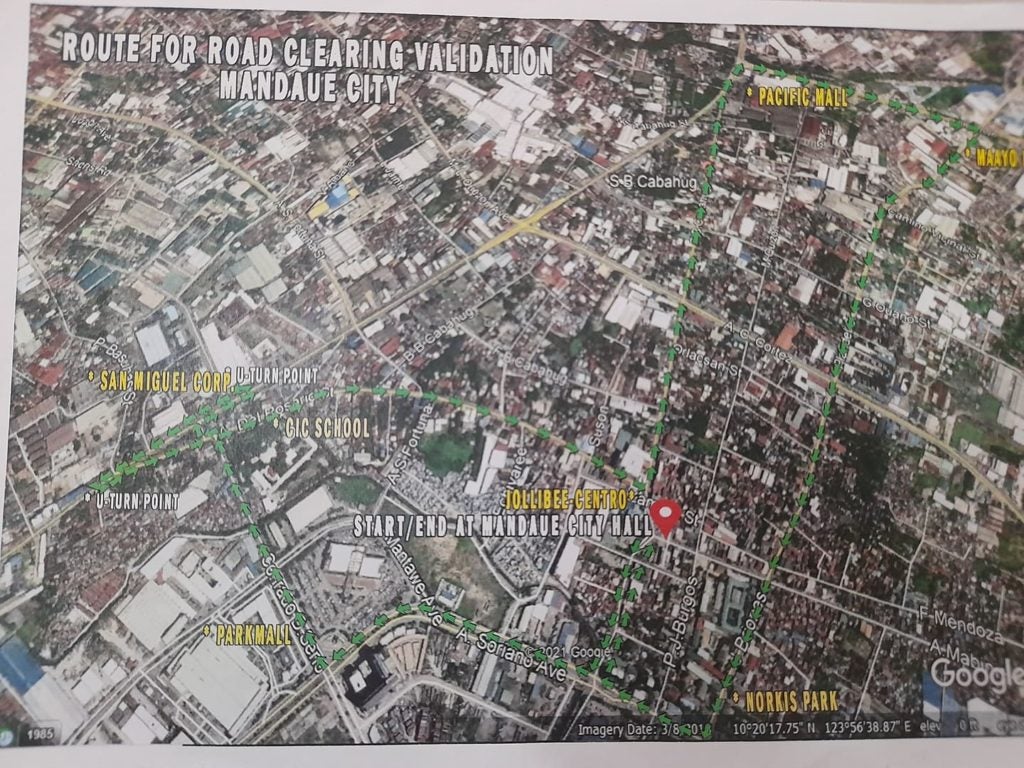 This is the map of the suggested roads that that will be subjected to validation by the DILG on Mandaue’s road clearing operations. | contributed photo

MANDAUE CITY, Philippines – Mandaue City is now ready for the actual validation by the Department of Interior and Local Government (DILG) on the city’s road clearing operations this February 23, 2021.

On Tuesday, February 16, the DILG Mandaue, Mandaue City Enforcement Unit (MCEU), and the Traffic Enforcement Agency of Mandaue (TEAM) conducted an initial assessment on the city’s roads in preparation for the actual DILG evaluation.

JohnJoan Mende, the new director of DILG here said that though there are few obstructions, like trees, illegally parked vehicles, vulcanizing shops, among others, overall the city’s roads are now prepared for the actual evaluation.

Mende said these are the routes in the clearing operation the city suggests but the evaluator may also want some roads to evaluate.

The DILG’s evaluation will be between February 16 and March 2.

Mende said that evaluators from DILG-Cebu City will evaluate Mandaue City’s roads and its clearing operations.

Ernesto Bongo, MCEU operations head, said as most of the obstructions found on the city’s roads are illegally parked vehicles, the MCEU and the TEAM will strictly implement the city’s ordinance about the matter.

The penalty fee for obstruction, obstructing the passage of another vehicle by discharging passengers is P500, P1,000 for illegal parking, and P1,000 for unattended vehicles. However, Bongo said that first time, violators will be apprehended and warned but for the second time offenders, the driver will need to pay for his traffic violations.