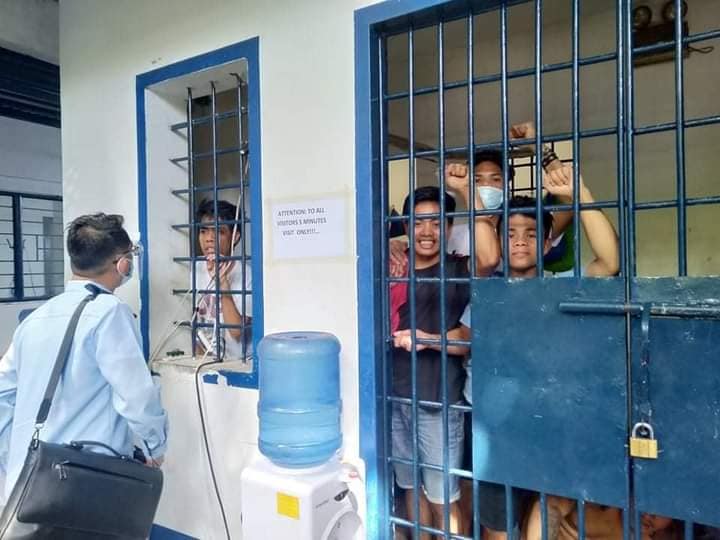 Lawyer King Perez of NUPL Cebu visits the six arrested Lumads and teachers at the PRO-7 headquarters, on February 16, 2021. | Photo from Save Our Schools Network

CEBU CITY, Philippines — Lawyer King Anthony Perez, spokesperson of the National Union of People’s Lawyers (NUPL) said they have found violations committed by the police during last Monday’s (Feb. 15) ‘rescue’ of Lumad minors at a retreat house inside a university in Talamban, Cebu City.

Perez, during an interview with the media on Tuesday, February 16, said that based on the videos they saw during the entire operation, the authorities committed violations against established protocols in rescuing minors or children.

(As a child’s rights lawyer, I can say that the authorities did not follow the protocols)

He added that the minors should not see armed personnel during the rescue as this is against established standards.

(Supposedly, these minors should not see fully armed police personnel when rescuing as this is actually against established standards and other protocols. On the manner of the rescue or arrest or whatever they want to call it, we saw problems here.)

Perez also noticed that no search warrant was presented during the operation which is standard protocol and that there’s a prohibition against unreasonable seizure and searches as stated in the law. There should be a process, and presenting a search warrant is part of it.

Perez also mentioned that the police should have communicated with officials of the retreat house where the minors were “rescued” and follow policies set in dealing with children who are rescued. He also insisted that the police crossed the line in this instance.

This concern was also echoed in the official statement released by NUPL Cebu that the authorities did not make any coordination with the administrators of the retreat house. NUPL-Cebu also noted the lack of any documents authorizing the police to take custody of the Lumad minors contrary to protocols established in rescuing alleged child victims.

On the other hand, Marlon Bosantog of the National Commission on Indigenous Peoples (NCIP), in a virtual press conference said the authorities don’t need to present a search warrant since those who were keeping the children, or the seven who were arrested have no right to keep them in the first place.

He also pointed out that it was the parents of the rescued minors who asked for the help of the police, so the authorities have every right to conduct the operation. /rcg