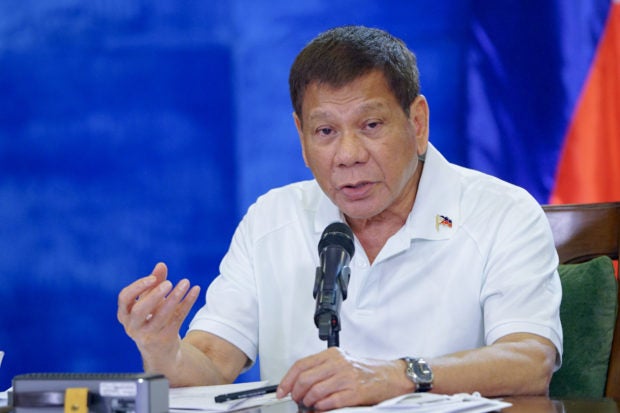 CEBU CITY, Philippines — The allies of President Rodrigo Duterte in Cebu has made a manifesto urging him to run for Vice President of the country in the 2022 elections.

At least 28 executives in Cebu have expressed support to this movement in hopes that President Duterte will heed their call to make him run for another six-year position that will essentially be a step-down to his current position.

This was done during a private meeting held Wednesday, March 10, 2021, with Energy Secretary Alfonso Cusi, vice chairman of PDP-Laban. In attendance were 18 mayors, three vice mayors, three congressmen and three board members.

Elected presidents who served a full term are perpetually disqualified from running for the presidential seat for another term.

This does not stop former Presidents to run for other lower government positions such as senators, congressmen, and Vice President.

Cusi revealed that some PDP-Laban-allied mayors in Metro Manila have passed a resolution, pushing for Duterte to run as VP in next year’s polls.

“Cebu officials are adopting this resolution. We are calling on members of the PDP to be proactive,” the official said in an interview.

Among the PDP-Laban members in Cebu, only Mayor Edgardo Labella was not able to attend the meeting, but in a phone conference the day after, he said he supports the party’s manifesto as well.

The mayor added that he was not able to attend the meeting because he was meeting with village chiefs in the mountain barangays and the notice was too short.

Vice Mayor Michael Rama who is also allied with PDP-Laban, albeit not being a member himself, said he also supported this movement and would agree that the President should run for vice president in the next elections.

The ruling party said in their manifesto that the projects and legacy of the President must continue to the next administration.

“Therefore, We the undersigned leaders and members of the PDP hereby resolved to convince our party chairman, President Rodrigo Roa Duterte, to represent PDP as its vice presidential candidate in the national elections in 2022,” the resolution stated.

Secretary Michael Lloyd Dino of Office of the Presidential Assistant for the Visayas (OPAV) said they would give the President the “freedom and free will” to choose his running mate in the coming elections.

“What I know he wants Senator Bong Go to run for president. Whoever is his choice, we will support the President. We will fully support his choice and the tandem. We hope the President will accept our manifesto,” Dino said.

Read: Bong Go says Duterte was just joking, no plans to run as president in 2022

As for Secretary Cusi, he pointed out that their ultimate goal is for the government’s agenda of change to continue, particularly in solving the problems of illegal drugs and corruption, and delivering of services to the community.

“We want the continuation of this leadership, this administration, and its 10-point agenda,” he said.

The ruling party’s manifesto further noted that it was confident that “by continuing the economic programs and infrastructure projects established under the Duterte administration, our country’s recovery from the crippling effects of the COVID-19 global pandemic would be ensured.”