In Negros Occ., man, who ran amok, killed by cop 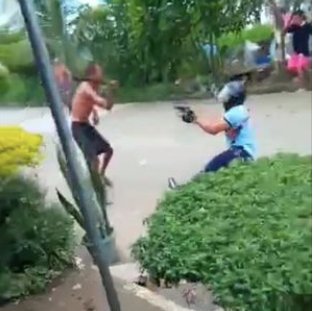 A policeman shoots a man wielding a bolo, who ran amok, in Victorias City, Negros Occidental at past 11 a.m. today, March 25. The man later died in the hospital. | screen grab from contributed video

CEBU CITY, Philippines — A 66-year-old man from Victorias City, Negros Occidental, who ran amok, died after he was shot by a policeman.

Police from Victorias City said Cerdeña was in the area to respond to a hacking incident, which was reported to them by a concerned resident.

Cerdeña opened fired to defend himself when Pimentel, 66, charged at him and hit his shoulder and holster with a bolo, they said.

“Initial investigation revealed that the suspect had a nervous breakdown and upon response, suspect hacked the victim and hitting (him) on his shoulder and holster. But later he was shot by the victim,” the reports stated.

Pimentel was rushed to a nearby hospital, but he was declared dead on arrival.

Victorias City is a fourth-class component city that belonged to the territorial jurisdiction of Negros Occidental.

Read Next
Labella to DOH: Set timeline for vaccine roll-out