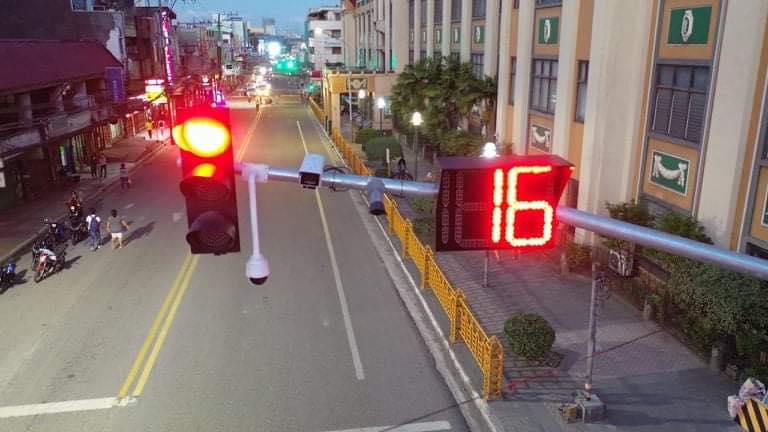 New traffic lights in Cebu City has been launched on Friday, March 26. | Photo Courtesy of the Cebu City PIO

Cebu City Mayor Edgardo Labella led the late afternoon ceremony on Friday, March 26, 2021, which was the ceremonial blessing of the traffic lights at P. Del Rosario Street in Cebu City.

Labella said it was high time for the city to have its traffic lights upgraded after three decades of using the analog to guide the stoplights.

In the new traffic system, everything is digitized, with motorists and pedestrians seeing the amount of time needed at stops and gos, and an easier and faster way of customizing the lights from the Cebu City Transportation Office (CCTO) command center.

“(It has been) Three decades since it was changed. This is the first time that we have included a digital system, and I think there will be an additional artificial intelligence system that will track all activities on the streets,” said Labella.

The mayor said that when artificial intelligence would be installed, the city could now analyze the traffic behavior in most streets and draft the best plan to address issues.

The city plans to put in a total of P500 million for the traffic system upgrades although the council has decided to allot P250 million at a time.

The mayor said he hoped that a better traffic system would help reduce the incidents of traffic jams due to broken traffic lights and prevent accidents caused by dysfunctional pedestrian signs.

However, many netizens criticized the event after traffic jams were experienced during the rerouting of traffic during the ceremony.

Netizens posted online saying there was no necessity to hold such fanfare for the traffic lights because this only caused additional traffic jams.

(The activity only caused traffic. Was it necessary to hold a ceremony to launch new traffic lights?)

Lawyer Amando Virgil Ligutan; legal counsel of the opposition party, Bando Osmeña-Pundok Kauswagan (BOPK); said the event was ironically causing traffic jams in the city instead of solving it.

The hour-long activity caused a temporary closure of the P. Del Rosario Street, but the road was immediately opened after.