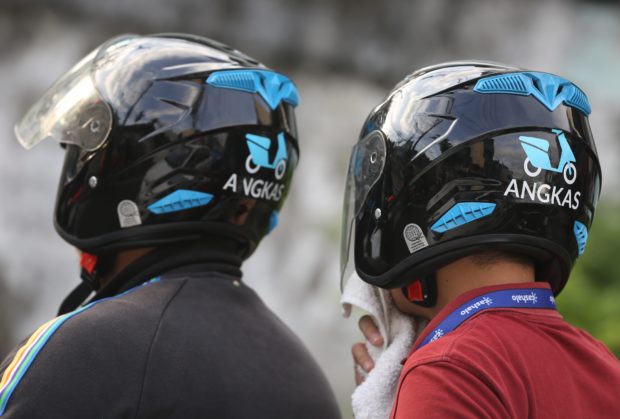 CEBU CITY, Philippines — The long-awaited return of the motorcycle taxis in Cebu particularly from Angkas has been welcomed by Cebuanos with glee.

Avid commuters in Metro Cebu, where the test run for motorcycle taxis has continued today, expressed their support for the return of the motor taxis.

Two workmates of a Business Process Outsourcing (BPO) company at the IT Park in Barangay Apas told CDN Digital that they are thankful for the return of the Angkas motortaxis because they now have another option to use when they return home from their 8 p.m. to 5 a.m. shifts.

So far, the Land Transportation Office in Central Visayas (LTO-7), the main agency monitoring the operations of Angkas said there have been no complaints yet on their first day back.

LTO-7 Director Victor Caindec assured that the Angkas have been inspected prior to their operations including the setting up of health protocols for the drivers.

The Angkas has been given provisional permits to operate by the Technical Working Group (TWG) as part of the continuation of the pilot testing which means that no new players are allowed to ply the streets and the registered drivers in the past are the only ones allowed to operate.

The regional director reminded the drivers that they have a huge responsibility for the health and safety of their passengers and urged them to follow both traffic rules and health protocols.

Customers are urged to report any erring drivers as this will be an integral part of the LTO-7’s report to the Department of Transportation (DOTr) at the end of the pilot testing, which will be determined by the national agency.

The Land Transportation Franchising and Regulatory Board in Central Visayas (LTFRB-7) on the other hand, noted that there has not been a lot of riders going out on the first day.

LTFRB-7 Director Eduardo Montealto, Jr., told CDN Digital that so far no complaints have reached them from both commuters and other franchised public utility vehicle (PUV) operators.

The LTFRB-7 will be assisting LTO-7 in making the reports to DOTr on the pilot testing of motorcycle taxis, and LTFRB-7 will focus on Angkas’ role in the ecosystem of public transportation.

This means they will focus on the impact of motorcycle taxis on the overall demand for public transport in Metro Cebu, how they compete with the other public utilities, and how they can be improved.

Montealto warns Angkas that the two transportation agencies in the region will be closely monitoring their operations and should they prove to be more disruptive than helpful, this will be reflected in their report to DOTr.

Both Caindec and Montealto are encouraging the drivers to be always careful and prioritize the safety of their passengers.  /rcg

Read Next
Who will take home the coveted shield at the Predator League 2020/21 Grand Final?