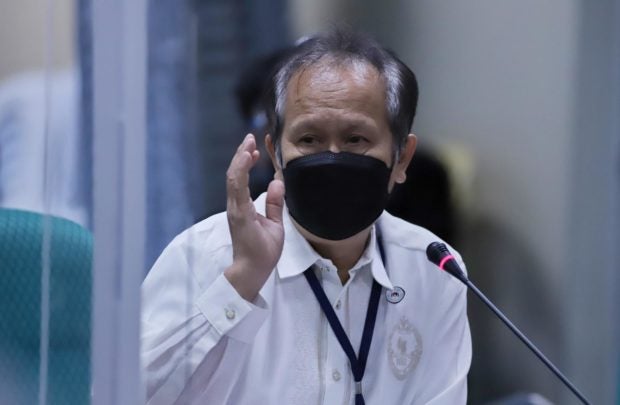 National Bureau of Investigation chief for National Capital Region Cesar Bacani testifies before the hybrid hearing of the Senate Committee on Public Order and Dangerous Drugs Monday, May 24, 2021, on the armed encounter between agents of the Philippine Drug Enforcement Agency (PDEA) and members of the Philippine National Police. (Photo by JOSEPH VIDAL / Senate Public Relations and Information Bureau)

MANILA, Philippines — An inmate at the Sablayan Penal Colony in Occidental Mindoro, right from inside his cell, “dictated the tempo” of the drug transaction that led to the deadly shootout between police officers and anti-drug operatives in Quezon City last Feb. 14, according to the National Bureau of Investigation (NBI).

During a hearing of the Senate public order and dangerous drugs committee on Monday, Cesar Bacani, the National Capital Region director of the NBI, provided this and other details of the bureau’s investigation into the fatal “misencounter” that stemmed from a buy-bust operation at a mall on Commonwealth Avenue.

Two police officers, a Philippine Drug Enforcement Agency (PDEA) operative, and an informant were killed in the shootout between agents of the PDEA Special Enforcement Service (SES) and the District Special Operations Unit (DSOU) of the Quezon City Police District.

Police maintained that they were conducting a legitimate buy-bust operation. They tapped Jonaire Decena, who was later revealed to be a detainee, as a poseur buyer, transacting with a certain James Tan.

Calls, video chats, and online messages between them were presented during the hearing.

According to Bacani, the Philippine National Police (PNP) submitted to the NBI a copy of the video call conversation between Decena and Tan. The NBI traced the call to the Sablayan Penal Colony.

It was an inmate there named Melvin Magallon, also known as Pawpaw, who first talked with Decena.

“But the picture in the cellphone of Mama Jo [that is, Jonaire Decena] was not that of Pawpaw,” Bacani told the committee in Filipino.

Bacani said James Tan was only used as a cover, but it was Magallon who was “dictating the tempo” of the transaction.

“It appears that he [Tan] was put there, but the one dictating the tempo is Pawpaw or Magallon,” the NBI official said.

In reaction, Sen. Ronald “Bato” dela Rosa, the committee chair, pointed out that this was the reason why he was persistent in pushing for the reimposition of the death penalty — in order to stop drug dealers from operating even behind bars.

“If we had the death penalty, this Pawpaw who is imprisoned in Sablayan, would have been executed. Then there would have been no misencounter between PDEA and the PNP,” Dela Rosa said in Filipino

“We are being fooled by drug lords in prison. That’s why I appeal to my colleagues to reimpose the death penalty on high-level drug traffickers,” he added.

Meanwhile, Bacani told the committee that Decena met with Tan’s courier, who turned out to be a PDEA informant named Untong Matalnas.

“[PDEA] allowed Untong to act on his own… What came out of our investigation was Untong, not necessarily PDEA, pretended to sell kay Jonaire,” Bacani said.

As Decena and Matalnas started to talk during the operation, Police Corporal Elvin Garado, who was with Decena and monitoring the transaction from a parked car, approached the two of them.

As soon as Decena and Matalnas had finished talking, Garado, who would be one of the two police officers killed in the shootout, gave the go-signal for the transaction.

“It was supposed to be a textbook buy-bust. Jonaire [Decena] would go first. Then they would count the money,” Bacani said.

“But then Jonaire said in a statement that she was overtaken by who told her: ‘Te, I’ll go ahead of you because it looks like there are a lot of them in the car,” he added.

Aboard the vehicle, however, were PDEA agents conducting their own anti-drug operation.

READ: ‘No announcement of buy-bust ops,’ PDEA says on clash with cops

When PDEA agents saw Garado approaching them with a gun, they stepped outside the vehicle.

“That’s what happened there,” Bacani said.

Matalnas was also killed in the shootout, but how he died remained unclear.

Meanwhile, Bacani said: “We are nearing completion of our investigation, 90 percent. In two weeks’ time, we can make our recommendation.”

According to him, the NBI is just awaiting the result of the forensic examination of the CCTV footage, phones, and  firearms “for authentication.”