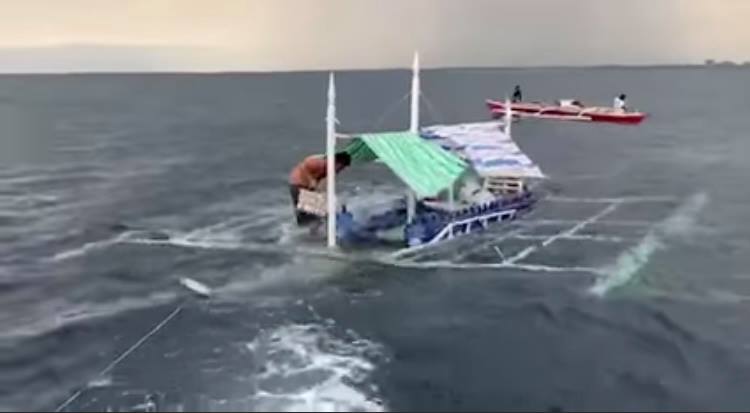 A pump boat loaded with galloons of mineral water and eggs is being towed to shore after it sank off Gilutungan Island Saturday morning, July 3, 2021. | Photo screen grabbed from the Facebook page of Councilor Cesar Muñez.

CEBU, Philippines — Three crew members were rescued after the pump boat they were on board and loaded with galloons of distilled water sank near Gilutungan Island in Cordova town on Saturday morning, July 3, 2021.

In his video posted on Facebook, Lexfer Baguio, one of the volunteers of Mobile Lugaw who all helped rescue the crew members, said they came from a feeding program in Gilutungan Island when they saw the crew of the pump boat waving at them as if asking for help.

The volunteers, who were heading back to the Cordova Roro port at that time, rushed to the sinking pump boat, tied a rope to it, and dragged it to shore.

Baguio said the pump boat which was headed to Gilutungan Island, was carrying gallons of mineral water and eggs, which could be the reason why it sank.

Bercede said the pump boat came from the Cordova Roro port and was on its way to the island to deliver water.

Mobile Lugaw is a feeding program project comprised of different groups. Volunteers go around the barangays in the town of Cordova to conduct feeding activities.    /rcg

Read Next
Cebu City to create group to rescue trees