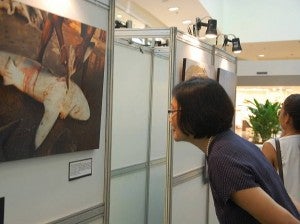 ON THE SPOTLIGHT. Cebu City Councilor Nida Cabrera, graced the opening of the photo exhibit and joined the call for shark conservation. (CDN PHOTO/ CHRISTIAN MANINGO)

An international  environmental protection activist group has brought to Cebu City a photo exhibit on the critical role sharks play in the ecosystem.

Greenpeace has put on display 12 photographs of sharks captured by world- renowned and award- winning photographers at the Level 1 Expansion of the Ayala Center Cebu. The photo exhibit which is also a run-up to the National Shark Summit is open the public until Friday. The Capitol will hostthe Shark Summit  on Aug. 14 and 15.

Greenpeace Philippines oceans campaigner Vince Cinches hopes that through the photo exhibit, people would get to know the creatures better and disabuse their minds of the thought that sharks are a menace to mankind.

Cabrera, chairperson on the City Council committee on environmental management, in her remarks said “we cannot overemphasize the significant value of sharks as the marine apex predator which contribute the health and balance of marine ecosystem,” said Cabrera.

Apex predators are animals with no natural predators and are on top of the food chain.

She admitted that even if sharks are apex predators, “humans have low respect towards respect to those cartilaginous fishes,” making conservation effort important.

Restaurants in Cebu have been discouraged from including dishes with shark meat on their menu.

HRRAC’s president Manguilimotan have called on their members against serving shark dishes, like the popular shark’s fin soup. She added shark consumption is not limited to restaurants but also on street food.