A legacy of bad communication 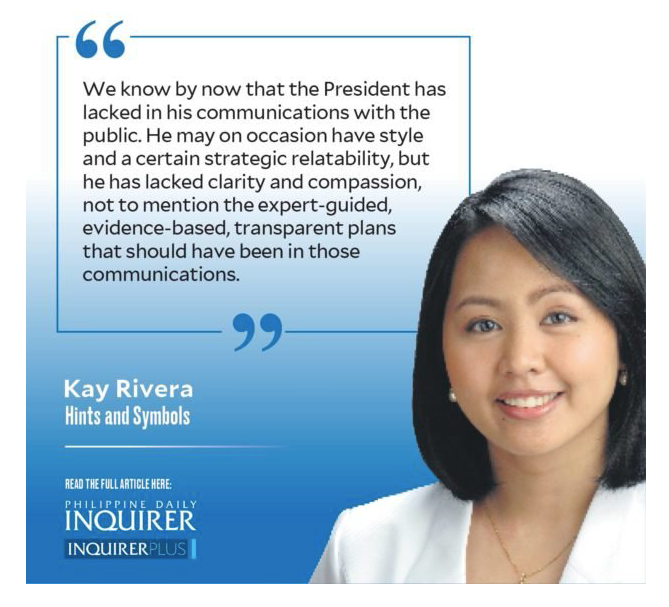 There is a certain dark amusement to be had in watching how the public reacted to Harry Roque’s recent statement that the President is the nation’s “best communicator.” On the one hand, I watched speechwriters, news anchors, political science experts, and politicians respond by dissecting, in quite serious terms, the President’s speeches, attributing intent to Mr. Duterte’s rambling style and strategy to his constant threats, flat jokes, and need to shock. I had, after all, only seen those speeches as the products of a lack of care and an inflated, violent ego, with perhaps a dash of illness or senility. On the other hand, the memes abounded, with “best communicator” ironically tacked onto such James Joyce-esque ramblings as Duterte’s 2019 rant: “Imee is a you know, for whatever this is worth, alam mo, talking about itong issue ng mga Marcos. Ako, kayong mga yellow dyan, I am a lawyer.”

What ceases to be funny is how the presidential mouthpiece has been reduced to pure, unembarrassed sycophancy. One wonders how the presidential spokesperson even maintains a straight face in front of the cameras, or how a celebrated lawyer has been so reduced. This is the loss of shame. Harry Roque must constantly cater to two audiences, one being the President himself, and the other, the nation. It is clear how much he disproportionately values one over the other, to the point of sacrificing clarity, logic, and integrity to not just remain in the President’s favor, but to curry it shamelessly. In his statements on the recent vaccine crowding, traced by some to careless statements made by the President, Roque could have merely evaded, explained, or soothed the public in careful terms without offending the President; instead in his sycophancy, he went overboard as usual, proclaiming the President the “best communicator” in the land, a remark that is as patently unnecessary as it is untrue.

We know by now that the President has lacked in his communications with the public. Good communication should be effective, timely, true, and clear. He has rambled, digressed, and threatened his way through what should be communications from the highest office in the land, sounding more like an intoxicated uncle rather than the chief executive of a nation in crisis. He may on occasion have style and a certain strategic relatability, but he has lacked clarity and compassion, not to mention the expert-guided, evidence-based, transparent plans that should have been in those communications. He often speaks without any clear logic and opines on matters without expertise or consultation. He also simultaneously manages to project condescension and power, while deflecting blame for lapses in government either on God, on the people themselves, or on the incompetence of others.

But if he is a bad communicator to the public, then Harry Roque is responsible, too, for these lapses. To Roque’s office, the job has fallen off trying to explain and clarify the ramblings of a man who doesn’t feel the need to clear what he will say with any person, and this job is not a small thing; it could, with appropriate debriefing, direct communication with the President and concerned agencies, and a measure of circumspection, make a little salvageable those nonsensical speeches, helping the public to feel that while the President may be untethered, the rest of higher government is on the ball. He could soothe ruffled feathers and serve as a clear voice for Malacañang’s plans. However, instead of allaying concerns and apologizing where needed, Roque obfuscates further, turning all clarifications into farces pandering to the President. He has virtually no concern about what the public needs or perceives. He validates nonsense rants and lies easily, both for himself and on behalf of Mr. Duterte. He denies ignorance where ignorance is plain to see. Even without clear prompting from the President, he barks at the heels of those perceived as enemies, including the Vice President. Now, in calling Mr. Duterte “best communicator,” he continues to cement his reputation as so-called Palace Pinocchio.

Where the spokesperson will find himself after the elections nobody surely knows, but it is clear that no one in the academic community will be able to take him seriously again. Among the many legacies of this administration is one of truncated, illogical, false, unhelpful communication, and it is a legacy that will continue to color spokesperson Roque’s career, long after the need for this blatant sycophancy has receded.