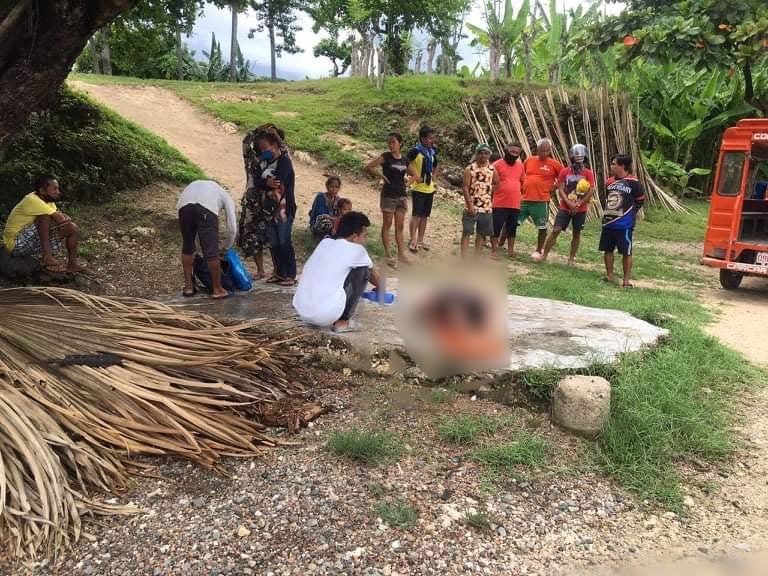 The lifeless body of the 13-year-old minor was found in Sitio Dunggoan, more than 20 hours after she drowned in Sitio Pungtod Dahunan, Brgy. Perrelos, Carcar City, Cebu, around 2:00 p.m. on Monday, October 4. | contributed photo via Paul Lauro

CEBU CITY, Philippines — The missing 13-year-old girl who was swept away by giant waves on Monday, was finally found 21 hours later floating off the waters in Sitio Pungtod Dahunan, Barangay Perrelos in Carcar City on Tuesday afternoon, October 5.

Rosario said that Encabo was with her friend, Rose Ann Caballero, 20, when the incident happened.

Police said that while the two girls were swimming in sitio Pungtod Dahunan, Encabo was swept by giant waves and could not be found. Encabo reportedly tried to save her friend but the waves were too strong and carried away the victim.

Caballero reportedly asked help from the Bantay Dagat personnel of the said barangay who immediately searched for the missing girl.

However, the rescuers failed to recover the victim’s body due to the inclement weather at that time, prompting them to temporarily postpone the operation.

Around 11:32 a.m. today, October 5, Rosario said that the victim’s body was recovered in Sitio Dunggoan of the same barangay, around two to three kilometers from where the incident happened.

Rosario said that they are yet to know if the parents knew about the victim’s plan to go swimming with her friend despite the bad weather. Rosario added that Caballero has no liabilities in the incident as they reportedly used to go swimming in the area.

He added that because of the threat of #LanniePH, the personnel of the city’s Disaster Risk Reduction and Management Office, together with the Bantay Dagat and the local police, have conducted an information drive, reminding residents to stay alert all the time.

According to the 11:00 a.m. weather bulletin of the Philippine Atmospheric, Geophysical and Astronomical Services Administration (PAG-ASA) #LanniePH has maintained its strength while moving west-northwestward over the West Philippine Sea.     /rcg

READ: In Consolacion, Indian national found dead 6 hours after being swept away by floodwaters