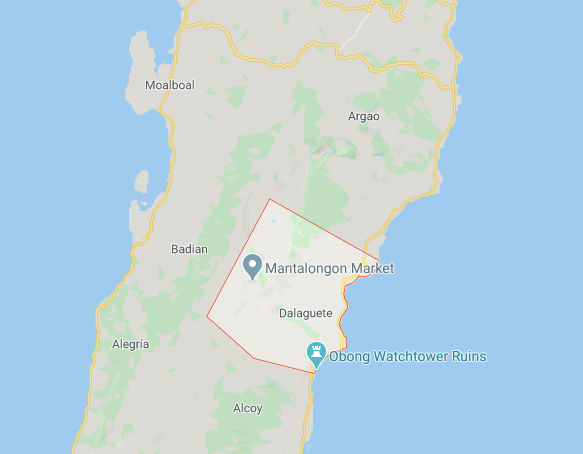 Map of Dalaguete | via Google Maps

CEBU CITY, Philippines — A supposed to be a happy family outing turned into a tragedy after a seven-year-old girl drowned in a three-feet-deep pool inside a resort in Dalaguete town in southern Cebu on Sunday morning, November 28, 2021.

Police Corporal Gem Vincent Pacaldo, duty investigator of the Dalaguete Police Station, said that the family and their relatives, who were from Mandaue City, arrived at the resort on Saturday evening, November 27, 2021.

They were there to celebrate in advance the birthday of one of their family members, which is on November 30. The group was made up of 13 people — eight adults and five minors.

Investigation showed that at past 1o a.m. today, the girl, together with her two siblings — her 15-year-old brother and her 12-year-old sister — asked to go to the pool which was adjacent to the room they were renting at the resort.

(In the morning, the kids were set to take a dip in the pool but the parents of the kids told them that they had first have breakfast. But the three kids insisted because they wanted to really swim in the pool, so they — the victim, her older brother and sister — left and later the victim drowned in the pool.)

The family immediately hurriedly went outside when they learned about the commotion.

Pacaldo said that the minor was being revived by a concerned citizen, who happened to be a nurse, and the nurse was assisted by the lifeguard on duty.

The victim was later rushed to the hospital but she did not make it alive.

Pacaldo said that the victim was left by her siblings in the three-feet-deep kiddie pool because they went to the nearby kiddie slide.

The 7-year-old victim had with her a floater, but she was not able to use it when she started swimming at the pool.

Pacaldo also learned from the representative of the management that there was only one lifeguard at that time because the second lifeguard arrived late.

(So we spoke with the management of the resort that they would put more improvements because the resort was a big one. It’s a lesson learned because there was only one lifeguard and can you imagine the heavy volume of people, but the adults also have an obligation to look after their kids.)

Pacaldo estimated that the resort accommodated at least a hundred visitors at that time.

He said that they were still waiting for the family, especially the parents of the girl, for a request for further investigation against possible lapses of the resort management.

Pacaldo said that he already suggested to the family to let the the victim undergo an autopsy to check what caused her untimely passing, but the parents were not interested in this.

As of this posting, the parents of the victim were bringing the body of the child home to Mandaue City.

Read Next
Cancer survivor’s quest is to fly