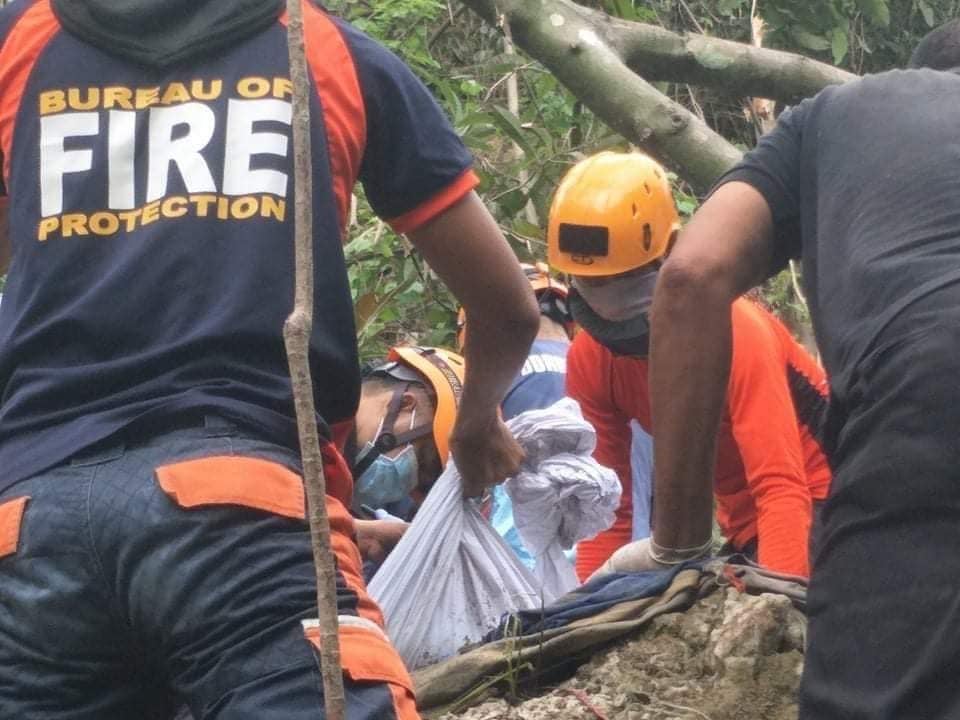 Rescue personnel recover the body of a girl whose body was dumped in a cave in Talisay City.  Photo by Mayor Gerald Anthony ‘Samsam’ Gullas FB

CEBU CITY, Philippines – Police have arrested the suspect who allegedly killed the 10-year-old girl whose body was found in a remote area in Barangay Tapul, Talisay City, Cebu last January 9, 2022.

Police identified the suspect as Ian Rey Baculi, an 18-year-old resident of Barangay Lawaan I and a native of Barangay Maghaway, both also in Talisay City.

In a press conference on Wednesday, Caballes said at least seven witnesses reported to them that they saw Baculi within the vicinity of the cave where the victim’s body was discovered.

Some of them also claimed to have seen him carrying the girl’s body to the cave, Caballes said.

The police chief also said Baculi confessed to the crime – both allegedly killing and raping the victim – when investigators brought him to their station for questioning.

(The statements of the witnesses and the suspect coincide.)

Police had a lead on the whereabouts of the suspect after receiving a tip from a concerned citizen.

(We conducted a follow-up operation in his house (in Lawaan I and Maghaway) but he wasn’t there anymore. A concerned citizen sent us a text message that he was in a mountain village. We went there yesterday morning to verify.)

The 10-year-old girl victim was found partly buried in a cave in Barangay Tapul last Sunday, January 9. She was reported missing by her parents last January 6.

Shortly before she went missing, she was with her mother and older brother doing laundry and taking a bath in the river situated a few meters away from the cave where her corpse was discovered.

When reporters interviewed Baculi, he nodded to questions asking him if he did the crime. He also nodded when asked if he followed the victim who was heading back home after taking a dip in the river.

But Baculi claimed he was not in his proper state of mind when he did the act.

(I didn’t plan to kill her. It crossed my mind… It seemed I didn’t know her that’s why I was able to do it.)

He added that he dragged the victim back to the river, and strangled her there until she died.

Findings from the investigators showed that Baculi was a distant relative of the victim.

Baculi said he regretted his actions, especially when he learned that it was a relative whom he killed.

(I beg the family for forgiveness.)

Police further stated that Baculi was a notorious thief in Barangays Maghaway and Tapul. He also reportedly used and disposed of illegal drugs.

Gullas, who was present during Wednesday’s press conference, said he will still give the P100,000 cash reward.

But the mayor begged off to disclose further details, saying that the police, city government, and informants entered into a confidentiality agreement.

(It will be the chief and I who will help them.)

Baculi will be facing charges of murder.

Caballes said they are still waiting for the official autopsy results to determine if they will also file charges of rape against the suspect.