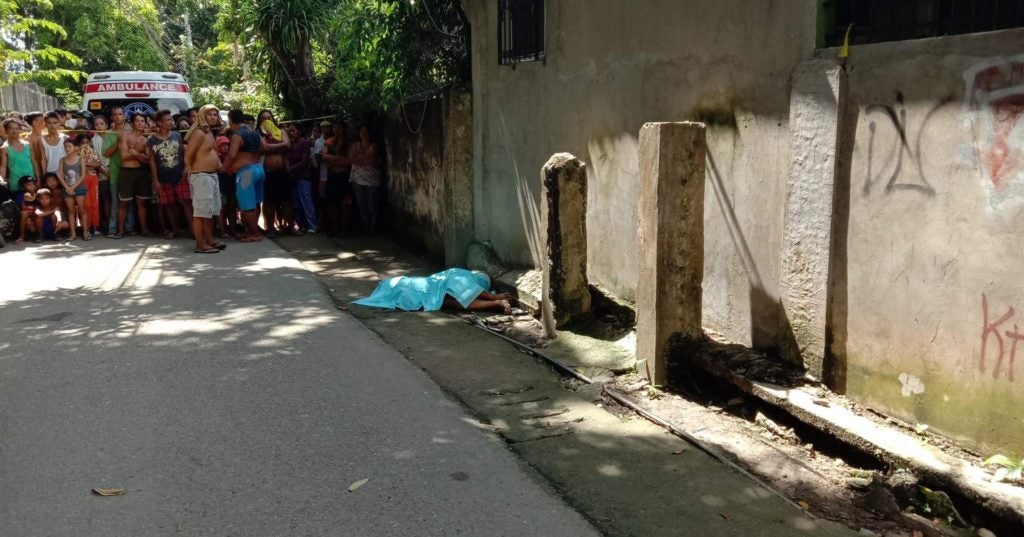 The lifeless body of habal-habal driver Benjie Tobalado, 27, is sprawled on Macupa Street in Barangay Basak Pardo after he was shot by a still unidentified assailant at around 1 pm on Tuesday, Oct. 11.

CEBU CITY, Philippines — A 27-year-old ‘habal-habal’ driver was shot dead while on board his motorcycle at the back of Don Vicente Rama Memorial National High School in Barangay Basak Pardo around 1 p.m. on Tuesday, October 11.

Gina, the victim’s mother, immediately went to the crime scene after she was informed that her eldest son, Benjie Tobalado, 27, was shot along Macupa Street of said barangay in Cebu City.

Benjie was a resident of Barangay Quiot, here.

Gina said that her son’s previous engagement with illegal drugs could be a possible reason for the killing.

Police Senior Master Sergeant Geoffrey Gutual of the Inayawan Police Station, said that other than illegal drugs, they are also considering love triangle as another possible motive.

Gina, the mother, told reporters that his son was a drug user. She knew about this last 2020 and has heard that her son was still using drugs until now.

Gina added that she also read a death threat from her son’s phone two years ago.

Gina also revealed that Benjie previously rented a house with his former live-in partner in Barangay San Nicolas this city, where he was allegedly picked up by individuals claiming to be policemen.

However, Benjie was eventually released. As to why her son was picked up, Gina said she has no idea.

For his part, Gutual added that they are also looking into love triangle as another possible motive since the victim was reportedly with a woman, who went to his house and accompanied the victim in going out of his residence minutes before the killing happened.

Gutual said that the victim and his live-in partner separated a year ago. The woman that Gutual said went to his residence was not Benjie’s former partner.

Because of this, Gutual said they are not discounting love triangle as one of the reasons for the killing.

Police continue to gather information to determine if the perpetrator was also on board a motorcycle or was just walking.

Gutual said that the victim still managed to walk a few steps after he was shot since his motorcycle is located a few meters away from where he was found lying on the ground.

As to the woman, who was with Benjie prior to the killing, Gutual said this remains under investigation.

According to Gina, Benjie was earlier playing an online game when someone called him, to which the latter responded “Asa naka? [pause] OK”

Gina said that, as per her knowledge, Benjie has no known enemy in their area.    /rcg