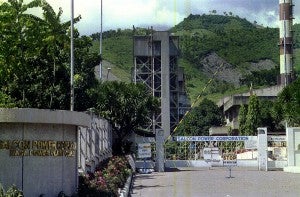 The old Cebu Thermal Power Plants 1 and 2 in the Naga Power PLance Comple will be demolished in july.

Old thermal power units to be demolished in July

He said the old coal-fired Cebu Thermal Power Plant 1 and 2, which form part of the existing Naga power complex, will be demolished starting July this year.

Henares said a feasibility study on the new facility is targeted to be completed by October this year. Construction will start in 2016.

“On this site will rise a new 2×150 MW CFBC coal-fired power plant, which will replace the existing old coal thermal power plant 1 and 2 which we will demolish starting July this year,” Henares said during the stockholders’ meeting yesterday.

Henares said SPC has also allotted P1.5 billion this year for the development of a small power plant in Luzon.

The company is eyeing two more power plant projects still in Luzon within the year as part of efforts to become a national player in the power generation sector.

SPC will also participate in the bidding for the STEAG State Power, Inc. coal plant in Cagayan de Oro and the Unified Leyte Geothermal Power Plant in Leyte.

“We want to be a national player that is why we want to have power plants in Luzon, Visayas and Mindanao. Right now we are only in Visayas,” Henares said.

Henares said they were also looking at wind power generation projects in the Visayas and Luzon.

“The one in Visayas is in Guimaras. That is still in active discussion now. We have been wanting to get into the renewable sources also to diversify our portfolio,” he said.