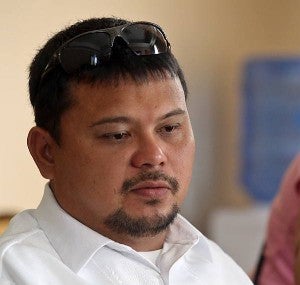 Loy Madrigal heads a volunteer group Guardian of the Seas

The group came from towns of San Remigio, Daanbantayan and Sta. Fe on Bantayan Island.

They were charged with violating the Philippine Fisheries Code.

Vincent Isles, lawyer  for 11 complainants, said the law  prohibits the use of active fishing gear within municipal waters.

The fisherfolk and volunteers, majority of whom are members of the  Guardians of the Seas, rallied in front of the prosecutor’s office.

They carried a banner with the image of the group’s founder, former Chief Security Officer Loy Anthony Madrigal.

Isles said the filing of charges was  not a counteraction to the boat owners complaint.  He said volunteers were set to file the charges last week but were unable to do so due to schedule conflicts.

The group said Sta. Fe police were not cooperative when the arrest was made last Wednesday, delaying the filing of the case.

Guardians of the Seas has volunteers from  fisherfolk in the north with a special chapter in Talisay City.

Two mini-buses and two Ceres buses ferried them from the north to the city.