NO SEA TRIPS DUE TO ‘LANDO’ 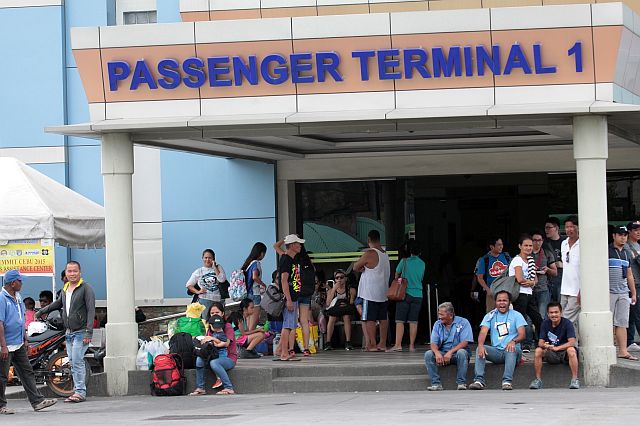 STRANDED/OCT. 17, 2015: Hundreds of passengers for Bohol and Leyte were stranded in Pier Terminal 1 after the Cuast Guard cancelled the trips of vessels below 250 GT cause by a Gail warning.(CDN PHOTO/JUNJIE MENDOZA)

Some 2,313 passengers were stranded in Cebu City’s ports as of 4 p.m. yesterday due to strong winds and waves caused by the southwest monsoon and typhoon Lando (international name Koppu).

The Mactan station of state weather bureau Pagasa said strong winds, not heavy rains, will continue to prevail in Cebu today and tomorrow as Lando will intensify the southwest monsoon or “habagat” winds.

“As the wind has been intensified, it is not safe to sail, especially those small vessels,” Alfredo Quiblat, Pagasa Mactan chief, said.

A gale warning was still in effect over Central Visayas as of yesterday.

Commander Weniel Azcuna, chief of staff of the PCG-Central Visayas, said vessels and motor bancas below 250 gross tonnage were not allowed to sail yesterday.

Pagasa Mactan recorded wind speed of 54 kilometers per hour and waves of 3.4 to 4.5 meters in Central Visayas.

“The winds that we experienced can’t topple trees or post,” he said.

Quiblat said they don’t know when the gale warning will be lifted since typhoon Lando can intensify without warning.

“Lando is heading to Batanes. If it passes over waters, it may gain strength,” he said.

Quiblat said the typhoon might leave the country at the end of the week due to the presence of a high pressure area in the Philippine West Sea.

He said they are tracking another storm outside the country.

“Both influence each other,” Quiblat said.

Nueva Ecija Gov. Aurelio Umali confirmed that two persons were found dead floating in flood waters in Palayan City, the capital of the province. The victims have not been identified.

In an interview with the ABS-CBN News Channel, Umali also said that at least 3,251 people were evacuated.

“We expect flood waters from the mountains of Gabaldon,” Umali said.

At 10:00 a.m. yesterday, Lando’s eye was located in the vicinity of Pantabangan, Nueva Ecija. Pagasa, in its 5:00 p.m. severe weather bulletin, placed the agricultural province under signal number 3.

President Benigno Aquino III ordered the suspension of work in government offices in Regions 1, 2, 3 and the Cordillera Administrative Region (CAR).

The Pagasa bulletin stated that Lando still packs maximum sustained winds of 150 kilometers per hour (kph) and gusts of 185 kph.

Signal no. 1 is raised over Batanes, Cavite, Laguna, Batangas and the rest of Quezon.