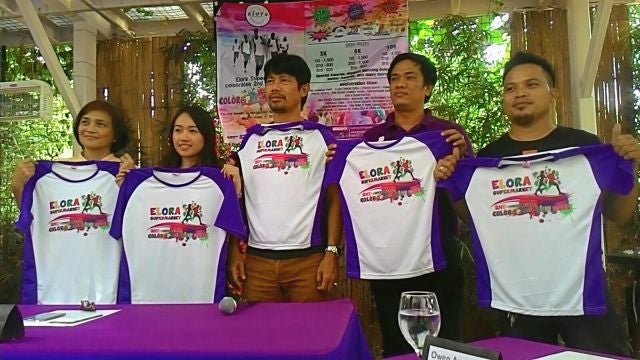 This is the second time the establishment owned by Dante Villanueva will be organizing a running event. Last year, a running was also held by Elora, attracting 700 runners, which was more than the 500 organizers expected.

This year, organizers are making some changes to make the race safer and more fun.

The longest distance offered last year was 12 kilometers but organizers cut it to 10k. The two other distances are 6k and 3k. According to  race director Bien Probadora of Pro Activ, they decided to make the route shorter so that runners wouldn’t have to reach the busy national highway.

Also, this year’s running event will be using the colored powder concept, which is very popular among the younger participants these days.

But unlike any other colored powder-themed fun run which are non-competitive, this run will give out cash prizes to the top three finishers in each distance.

“I will assure everyone that it will be a fun-filled day for those who will join the running event,” said Villanueva, Elora Supermarket owner and CEO of Dan Enrico Corporation, during yesterday’s launching at Café Elora.

Joining him in the event launching was his daughter, Ara Villanueva, who is the marketing and planning head of Elora Supermarket, COO of Dan Enrico Corporation Owen Aregalas and Probadora.

The running event will also serve as the official launching of the newly opened Café Elora situated beside the supermarket. Proceeds of the race will go to the Marigondon Elementary School.

Sudtonggan, Cordova, Babag, Tagunol and Talamban, Infinitea at the City Times Square, Sports Warehouse at the Cebu IT Park and Libre247.com across Diplomat Hotel.

Read Next
WHO OWNS CICC BILLBOARD?