HIS life as a priest wasn’t always smooth sailing.

Like Christ’s other disciples, there were moments of frustration, disappointment and even fatigue.

But Fr. Jonas Mejares, OSA, now rector of the Basilica del Sto. Niño, chose to hang on, knowing that the Lord who chose him will never abandon and let him down.

“If I would be given another chance to choose what profession or vocation to take, I’ll still choose being a priest,” he told reporters yesterday. 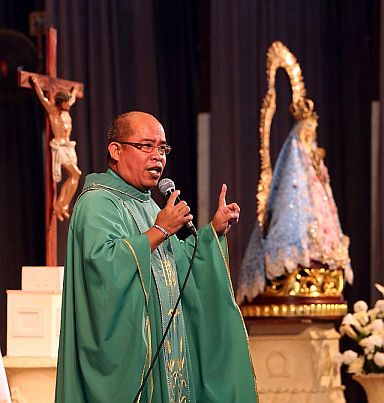 Mejares, a native of Loon town in Bohol, yesterday marked his 25th anniversary as a priest.

The 51-year-old priest officiated Mass at the basilica’s pilgrim center in downtown Cebu City yesterday afternoon and spent time with parishioners and devotees of the child Jesus.

In the evening, he performed in a show at the Mariners Court in Cebu City, as a way of thanking God for the favors he received.

Mejares, a veteran musician, composer and singer, distributed to the faithful a commemorative CD in celebration of his 25th sacerdotal anniversary.

“I want to evangelize people through music. I want to touch people’s lives and communicate to them the unconditional love of Christ through songs and music,” he said.

Mejares said making songs part of his homily isn’t meant to entertain but to inspire people to heed God’s message of love and renewal.

“I want to touch people’s lives. And I believe music is a powerful tool to do it. Since the Lord has given me a talent in singing and music, I might as well use it to glorify Him,” he said.

Often dubbed the “singing priest,” his passion for music showed early at the age of five.

While studying in Italy, he extended his apostolate to Filipino communities and performed in four concerts with some Filipino artists in Rome and Milan.

His passion further blessed him with a chance to form and conduct a grand choir, composed mostly of Filipinos, during an audience with Pope John Paul II at Vatican City in 2003.