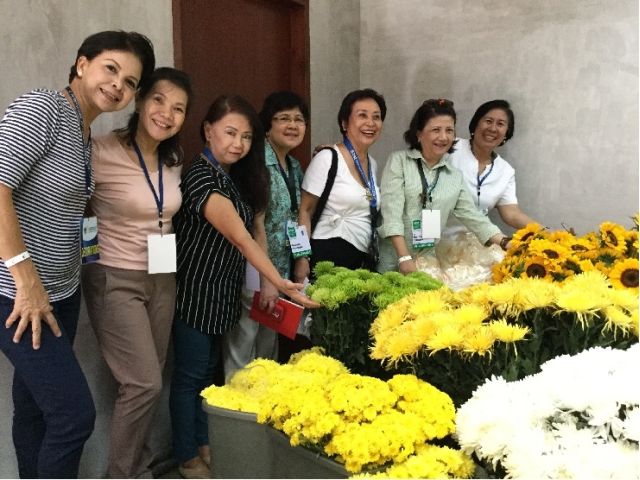 With the Eucharist at the center of the 51st International Eucharistic Congress, lay volunteers in charge of altar adornments opted for flower decorations along the lines of simplicity and subdued elegance.

“The most important thing is the Eucharist so we should focus on the celebration of the Eucharist not the flowers,” said Cecilia “Cely” Chiongbian in an interview at the IEC work station on the eve of the Statio Orbis mass.

Chiongbian was one of more than 30 volunteers who prepared and decorated the altar for the opening Mass in Plaza Independencia, daily Masses and series of catechesis in the IEC Pavilion, the Mass for first communicants in Cebu City Sports Complex and the concluding Statio Orbis Mass at the South Road Properties.

The off-site events were massive in terms of attendance.

Meanwhile, the daily activities inside the IEC Pavilion were limited to registered delegates who were able to have a closer look at the altar decorations in the center stage.

The work of decking the altar with fresh flowers  daily was a collaboration of individual and corporate benefactors, lay movement Bukas Loob sa Diyos and young professionals, some of whom took a two-week leave from their jobs to do volunteer work for the IEC.

According to BLD member Precy Pinunggan, the flowers were bought from China and Taiwan while some were ordered from Davao and Baguio.  Roses from Mawmawan, a mountain barangay in Cebu City, were also used to decorate the altar.

The imported blooms and those bought from Davao and Baguio were forwarded from the airport of origin to the Mactan International Airport, according to Malou Rendon, another BLD member.

Volunteers picked these up in the morning and delivered to a work station in the IEC Pavilion where work started at 5 p.m. until 2 a.m. of the following day.

The BLD team was headed by Cely Llanos. Some 20 BLD members assisted the floral designers in cutting and tubing the flowers and preparing the foam grid.

Some generous individuals and a pharmaceutical company contributed money for the flowers estimated at more than P1 million.

Rendon said they also contributed some amount for the flowers and food for the group.

Asked to comment on the volunteer work that sometimes deprived them of sleep, Pinunggan said, “If you are working for the Lord, you don’t feel tired. This is a once-in-a lifetime event.”

For her part, Rendon was happy to be involved in the preparation since it gave her the chance to see exotic flowers like the imported cabbage roses.

“This is a great moment. We are proud doing this,” Rendon said.

Kingsley Medalla said he took a two-week leave from his call center job to do volunteer work for the IEC.

“My volunteer work has given me a great sense of joy. My experience has deepened and affirmed my faith,” Medalla said.

Asked about her own takeaway from the IEC, Cely Chiongbian said, “I will continue to be conscious of the poor people in the world, to treat them with respect.”