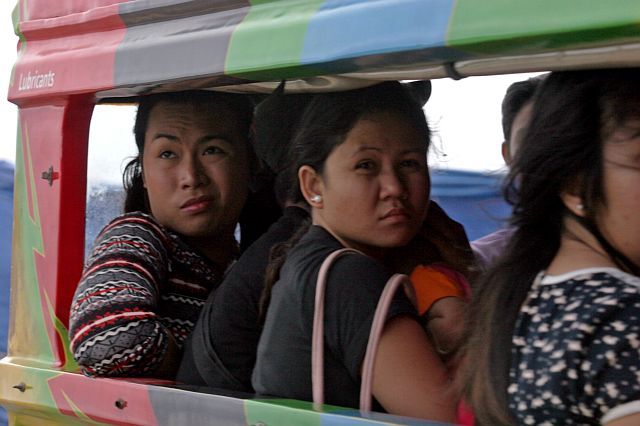 Aside from dealing with traffic congestion, some commuters are still unaware of the P6.50 fare cut as they still pay P7 to the jeepney driver who often doesn’t bother giving the 50 centavo change. (CDN PHOTO/JUNJIE MENDOZA)

To make it official, the regional Land Transportation Franchising and Regulatory Board (LTFRB-7) will issue a fare matrix confirming the P6.50 fare and corresponding increases to commuters and passenger jeepney drivers alike.

LTFRB-7 Director Reynaldo Elnar asked for updated routes from Metro Cebu’s traffic agencies so they can calculate the corresponding increase in fares for longer distances.

The last time their office received a list of updated routes and calculated fare matrix was in 2008.

This is good news for commuters like Princess Bermoy, a sales agent who only knew about the P6.50 fare rate from Cebu Daily News.

“There should be a signage inside the jeepney indicating that the minimum fare is P6.50 so people will be aware. Sometimes if you pay P20, if you don’t remind the driver, they will not give you change,” she said in Cebuano.

Paula Mangaron, who spends P58 in fares daily for her fare from her house in Talisay City to her workplace at SM and back, said commuters should be informed about the P6.50 fare rate.

In computing the fare matrix, Elnar said they need to identify first the landmarks and routes with more than five and less than five kilometers.

The P6.50 fare rate applies to the first five kilometers covered by the passenger jeepneys.

Beyond five kilometers, an additional 90 centavos is charged to the commuter.

The militant transport group Piston said they are happy that a fare matrix will soon be issued.

Greg Perez, Piston Cebu coordinator, said confusion over the fare rate had caused arguments between the commuters and the drivers.

Jeepney operators whose drivers overcharge will be initially penalized with a P5,000 fine under Joint Administrative Order (JAO) 2014-01.

Drivers like Wilfredo Alegante, who had been working for 20 years, are against the fare rate since it reduces their income.

But Alegante said they cannot do anything about it. Alegante earns P500 a day but he said he spends P600 for gasoline and pays P1,000 to the operator for the jeepney rent.

Junjie Daydayan, a 36-year-old native of Sibonga town who drives the 12-I Labangon to SM route, said he’s against the P6.50 fare because that means passengers will pay a flat rate of P6 and won’t bother paying the 50 centavos.

Daydayan pays P800 for the jeepney rent and earns P400 to 600 per day.
“Suklian nako kon naa koy  tag 25 centavos (I will give them change if I have 25 centavos),” he said./With Correspondent Julit C. Jainar