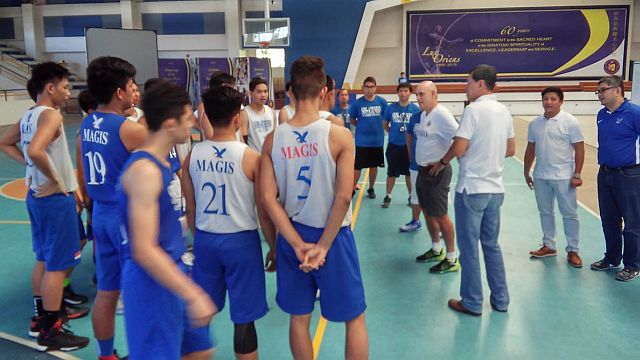 Tab Baldwin with players of the Ateneo de Cebu Magis Eagles at their gym in Canduman, Mandaue City. (Contributed)

Working on the need to foster better relations with other sister schools and alumni, Ateneo and Gilas head coach Tab Baldwin visited the Sacred Heart School-Ateneo de Cebu and found himself impressed with the coaches, the players and the culture of the reigning national champions.

Shortly after landing in Cebu, Baldwin who was accompanied by Ateneo team manager Epok Quimpo and athletic director Em Fernandez, immediately went to the Canduman campus and spoke to the Magis Eagles who are in the midst of preparations for their title defense in the upcoming NBTC National High School Championships next week in Manila.

“I was impressed with Coach Rommel (Rasmo), his staff and the Sacred Heart Magis Eagles. Maybe some future Blue Eagles,” hinted Baldwin who is getting the hang of things as the new head coach of many-time UAAP champions Ateneo Blue Eagles.

“I’m just really enjoying the challenge of working with young players. They’re responding great, their energy is infectious. I’m getting old so it’s nice to be surrounded by young people,” said Baldwin with a laugh.

Baldwin though, tempered expectations for a team that will be replete with new and young talent in the wake of the departure of two-time MVP Kiefer Ravena and veteran gunner Von Pessumal.

“It’s hard for me to say now what we’re going to look like and what we’re going to look like compared to the competition because I don’t have anything to compare us to. I like what we’ve got. I like the attitude of the players, their work ethic. And usually when those things are in place, good things will happen.”
Still, he admitted that there will be plenty of lessons to be learned by this current crop of Blue Eagles, from now until the UAAP tournament’s start later this year.

“You recognize the need for more discipline in that environment, the need for more teaching. The role of coach always has an element of teaching to it but when you’re working with kids who have had much less experience with the game, teaching is the compensating factor. I find they’re really receptive. They’re students of the game,” bared Baldwin.

Read Next
Gilas to skip Cebu camp for now