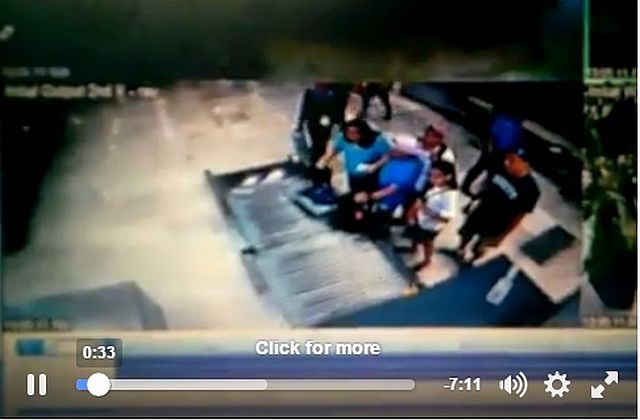 A security camera footage shows the X-ray machine area where passenger Percy Ferrer was asked to open his bags by airport security personnel. Found inside his bag was a bullet and an empty shell. ( VIDEO FROM OTS)

A copy of the closed-circuit TV footage from the Office of the Transportation Security (OTS) was turned over to the Mactan Cebu International Airport’s Aviation Security Unit (MCIA-AVSUE) office yesterday.

Senior Supt. Raul Bargamento, MCIA-AVSUE chief, said based on what he saw in the 10-minute video, there is no indication that bullets were planted in the bag of passenger Percy Ferrer.

Bargamento said Ferrer, a firefighter from Buenavista, Guimaras, was shown opening his bag where a bullet from an M16 rifle and an empty shell of a .45 pistol were recovered.

He identified Ferrer after asking for a passenger manifest from the airline.

The video footage showed Ferrer at the screening area.

“He was told that something was seen from his bag. He checked the bag. He was searching and bullets were found,” Bargamento told Cebu Daily News.

OTS has a “no-touch policy” on passengers’ luggage and bags to prevent doubts and suspicion. The recovered bullets are now under the custody of MCIA-AVSUE.

OTS chief Jemar Nietes said it was clear in the security camera video that their personnel didn’t place bullets inside Ferrer’s bags.

He said there is no “tanim-bala” (bullet-planting) syndicate operating in the airport.

Bargamento said the recovered bullets were kept by their duty officer.

Since only the footage at the screening area was available, they also requested for other footage from GMR Megawide Cebu Airport Corp. (GMCAC).

The other footage would show the restroom where PO3 Alcestes Roxas allegedly received P2,000 as well as other areas where Ferrer passed by or stayed at the airport.

In a statement, Malou Mozo, GMCAC corporate communications junior manager, said they were waiting for the outcome of the investigation by the Philippine National Police and OTS on the incident.

“Rest assured security in the airport remains at full force,” she said.

MCIA-AVSUE is also waiting for the joint affidavit of the three OTS personnel who were assigned at the first screening area.

PO3 Roxas was given until tomorrow to submit his sworn affidavit.

Roxas was relieved from his post at the public assistance desk after the incident.

He is temporarily doing clerical work in Bargamento’s office.

When asked if they will file charges against Ferrer if it’s proven that he owned the bullets, Bargamento said they won’t.

“He was released and allowed to go home because he introduced himself as a fireman, and uniformed personnel are exempted. That’s why he’s forgiven,” he said.
Ferrer told Bargamento that his lawyer is sending his sworn statement via mail.

Owing to the high influx of passengers for the Holy Week, Bargamento advised the public not to bring prohibited items like firearms and other weapons.

“Always double check your bags before and after leaving for your flight. As much as possible, don’t borrow bags and if you do, double check them,” he said.

Read Next
Castro files raps against seven officers at Ombud