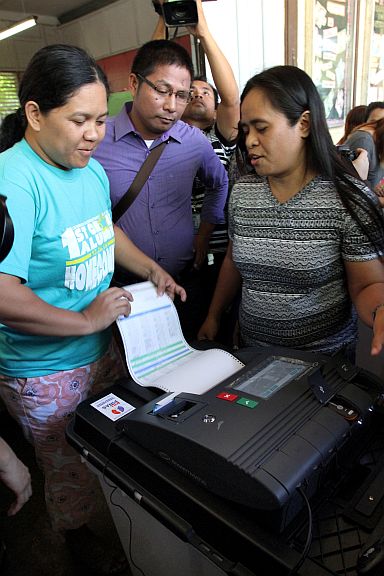 FINAL TESTING AND SEALING: Regional Elections Officer Jose Nick Mendros (center) observes as members of the Board of Election Inspectors do the final testing of the Vote Counting Machines (VCM) at the Guadalupe Elementary School in preparation for Monday’s elections. (CDN PHOTO/JUNJIE MENDOZA)

A test conducted on Vote Counting Machines (VCMs) yesterday proved that there could be no cause to worry about the integrity of the counting machines as sample voting by different people including journalists, watchers and other onlookers showed that the vote receipt from the machine matched those that they shaded in their ballots.

During the final testing and sealing of the VCMs at Guadalupe Elementary School in Cebu City yesterday morning, Comelec 7 regional director Jose Nick Mendros demonstrated to reporters how the voting process would look like using the 10 sample ballots included in the packages containing the VCMs.

At least 10 volunteers, selected at random, were made to fill out the sample ballots for the VCM of Precinct No. 548 in Guadalupe. During the test, the “voters” confirmed that the list in the vote receipt from the machine matched those that they shaded in their ballots.

However, only nine of the ten sample ballots were read by the VCM after one ballot was rejected and registered by the machine as “fake ballot” even after it was fed into the VCM again in four different orientations.

Mendros could not confirm if the “fake ballot” was included in the sample ballots on purpose just for the test, but said that it should be taken to mean that the VCM’s security measures are stringent in terms of the materials used.

In actual cases like this on election day, Mendros said that they will allow the voter to try again one more time using a replacement ballot.

“There’s a rule for replacement. If the ballot will be rejected, for reasons not attributable to the voter, the BEI will give him another chance. Once only,” he said.

Mendros said this will be decided based on the discretion of the concerned board of election inspectors (BEIs) in a certain precinct.

He clarified though that there are no extra ballots printed by the Comelec since the number of official ballots is equal to the number of registered voters. But since there is usually no 100 percent turnout of voters, unused ballots can be used as replacement in cases where it is allowed by the BEI.

For rejections attributable to the voter such as shading more than the required number of bets or writing or staining the ballots, Mendros said that a replacement of the ballot will not be allowed.

In the unlikely case of a mismatch of the ballot and the vote receipt, Mendros said the voter has the right to file a complaint before the BEI, which in turn records the complaint for submission to the Comelec central office which has the authority to act on it.

“So far, the machine accurately reads. You’ve seen it, you tested it. So mali yung sinasabi nilang bias yung machine (What they’re saying that the machine is bias is not true). I would say for that precinct (548), our final testing and sealing was successful,” Mendros told reporters after the dry run.

All of the tested and sealed VCMs in Guadalupe Elementary School yesterday were stored in one room with security personnel and watchers manning it.

A power outage at the Mandaue City Central School occurred during the testing prompting the BEI to use backup batteries but Chona Gabilin, a BEI chairman in one of the polling precincts said the power outage was an advantage since it allowed members of the BEI to check if the VCM batteries were properly working and could supply ample power to the VCMs.

Aside from the power outage, there were no others incidents reported in that voting center and all ballots were properly received and counted by the VCM.

Meanwhile, Sun.Star Cebu photo journalist Allan Cuizon who took part in the FTS purposely voted for 13 senators instead of just 12 by putting a small dot for the extra senator instead of shading the entire circle.

When the result came, it showed Cuizon had voted for12 senators.

Gujilde explained that the machine could have detected only the other 12 votes shaded properly and not the 13th senator that only had a tiny dot on the space.