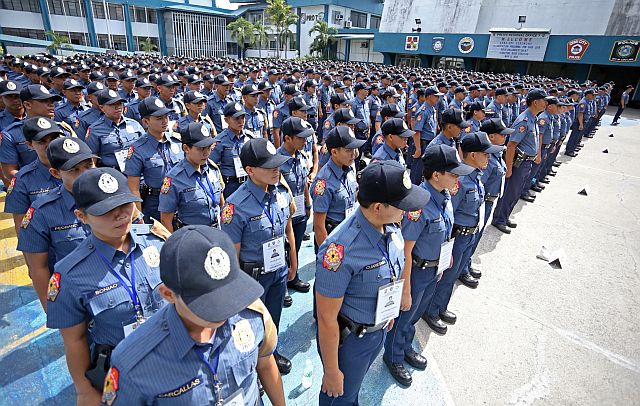 Policemen get ready for deployment to different areas in Cebu province in time for the elections on May 9. (CDN PHOTO/LITO TECSON)

Police authorities in Dumanjug town in southern Cebu have intensified foot patrols and conducted checkpoints to tighten their monitoring against vote-buying.

“We are conducting patrolling sa mga (in the) possible areas nga naay mga mag-vote buying (where there are vote- buying). We have also checkpoints,” Amoroso said.

He said some 84 policemen have arrived as augmentation force for the May 9 elections. Dumanjug, which is listed among the Election Watchlist Areas, originally had a police force of 25 members.

With the augmentation, he said two policemen would be assigned to guard each of the 38 voting centers in the town. Four patrol teams have been formed to monitor certain areas, he added.

On May 5, a concerned citizen of Barangay Tapon called the Dumanjug police station at around 2 p.m. to report an alleged vote buying.

Amoroso said they went to the area to confirm the report and saw two unidentified women who looked like they were trying to persuade an individual. The two women allegedly fled when they saw the police.

Amoroso said they failed to catch them but were able to recover one green eco bag containing white envelopes stapled with the names of voters and a total cash of P2, 460 in different denominations. Also in the bag were a list of voters and political flyers of One Cebu Party candidates Ely Amadora, Ricardo Boquecosa and Ricardo Condes.

Amadora and Boquecosa are running for councilors in Dumanjug while Condes is running for Vice Mayor.

“We have to confirm it kung unsa ba na siya katinuod. Dunay mga ebidensiya nga nadakpan, so imbestigahan tanan. (We have to confirm the incident. Evidence was seized. Everything will be investigated,)” he said.

He said vote-buying is difficult to prove and they were doing their best to catch perpetrators red-handed.