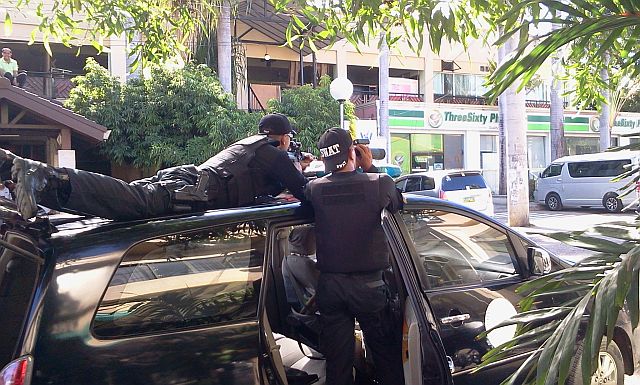 Lapu-Lapu policemen, including a SWAT team, position themselves near the gasoline station in Barangay Mactan, in a robbery exercise simulation. (CDN PHOTO/ NORMAN MENDOZA)

THOUGH the Lapu-Lapu City police were able to corner and arrest the robbery suspects in a robbery simulation exercise of a gasoline station yesterday morning, but evaluators found some loopholes that need to be improved.

Senior Supt. Rey Lyndon Lawas, Police Regional Office Deputy Director for Operations, gave a rating of six on a scale of 1 to 10 after observing some lapses during the exercise.

He said the crime scene was not properly secured for gathering of evidence. Two vehicles wanting to gas up at the gasoline station were not barred by an operative despite a police cordon.

Also, the detailed negotiator should not give the briefing to the media on what transpired in the crime scene.

Some passersby and motorists were also caught by surprise by the exercise which caused traffic in the area that was supposed to be handled by responding policemen.

On the positive side, the police operatives were able to respond immediately and set up roadblocks in all four police stations in Lapu-Lapu.

Six persons playing the role of robbery suspects were apprehended in a road blockade established by elements of Pusok Police Station in Barangay Ibo while on board the getaway vehicle.

The assault team composed of Special Weapons and Tactics (SWAT) initiated the assault and arrested the two “suspects” after one of them shot a worker of the gasoline station in Barangay Mactan whom they had taken hostage.

A sniping team who positioned themselves at a distance served as backup of the assault team.

Senior Supt. Arnel Libed, Chief of Lapu-Lapu City Police Office, said they were not informed of the exact location of the subject area and they just relied on information given by the Police Regional Office (PRO-7) to make it appear like a real robbery alarm.