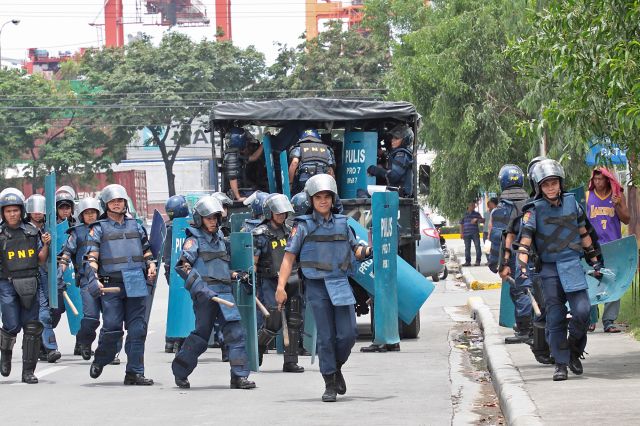 As President-elect Rodrigo Duterte starts his six-year term at noon today, police officers expect to move their campaign against criminality to a higher level.

“There will be more aggressive police actions particularly against illegal drugs and other priority crimes like robbery and theft,” said Senior Supt. Rey Lyndon Lawas, deputy regional director for operation of the Police Regional Office in Central Visayas (PRO-7).

He said all police officials, including Chief Supt. Patrocinio Comendador Jr., PRO-7 director, will convene in Manila tomorrow for a national command conference.

“We expect RD (Comendador) to bring a long list of things policemen shall do when he returns to Cebu after the conference,” Lawas told reporters yesterday.

Amid Duterte’s hardline stance, a suspected drug pusher who was arrested in a buy-bust operation appealed to the new president to give him a chance to begin a new life.

“Mr. President, mangayo unta ko og second chance aron dili ko mapriso (I am asking for a second chance, so I won’t be imprisoned),” was the message of Alvin Ybañez Mendoza to Duterte after promising never again to get involved in illegal drugs and instead take care of his family in the “right” way.

Chief Supt. Ronald dela Rosa, incoming chief of the Philippine National Police, is expected to lead all policemen in fighting criminality across the country.

“This is the call of the situation. We need to put an end to the problem of illegal drugs. If we want that, we can’t be lackadaisical otherwise the problem will devour us,” he said.

“We need an iron hand. But it does not necessarily mean that policemen shall be daring all the time. We can still be human even in our campaign against criminality although we have to be more forceful in our approach,” he added.

Although their primary concern is to stop the illegal drug trade, Lawas said the police will also continue to go after petty crimes.

“If we don’t mind about petty crimes, these might escalate to bigger problems later on,” he said.

Meanwhile, Lawas said there is no order to raise to full alert status. He said they have not received any reports relating to terrorist threats that may disrupt any upcoming activity.

“Raising the full alert status will depend on what the situations call for. If a situation calls for a more heightened security, we will definitely proceed with increasing our security plans,” he told reporters yesterday.

Full alert status requires every policeman to be in their respective stations and ready for deployment. No leave is allowed otherwise they will be recalled for duty – including those who filed for leave prior to the status upgrade.

Lawas said they have already formulated security plans for every major activity. These plans were followed during Wednesday’s oath-taking of Tomas Osmeña as Cebu City mayor, along with the newly elected councilors.

“We are always guided by the lessons and experiences learned, specially those we had during the Cebu leg of APEC. These particular standards and procedures are still being practiced and applied today, and they are a big help to improve our security provisions during major events. And indeed we have observed some improvements on our security plans,” he commented. /with UP Cebu Intern Morexette Marie Erram