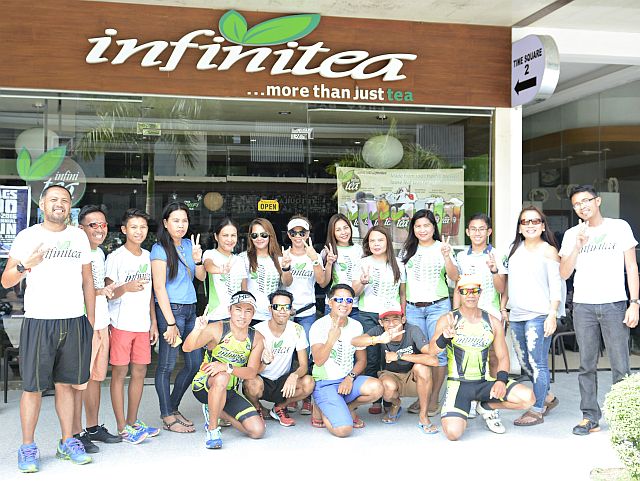 Members of the Infinitea Running Club are all set for the Cobra IronMan 70.3 Asia Pacific Championships. (CDN PHOTO/CHRISTIAN MANINGO)

FOUNDING members of the Infinitea Running Club introduced their triathlon team that will compete in the upcoming Cobra IronMan 70.3 Asia Pacific Championships in Aug. 7 in Cebu.

Headed by team captain and Infinitea owner John Alcano, the team will make their debut in the biggest triathlon race in Asia with one of the most decorated Cebuano marathoner Noel Tillor on their side.

Tillor will also debut in the very competitive Filipino elite division while the rest of the team will be vying in their respective age groups.

“The running club officially joined triathlon races since 2015, but we did not formally launch the triathlon team at that time,” said Alcano. We decided to formally launch the team this year because it is timely since IronMan 70.3 is drawing near, and that is the biggest race the team will be joining,” said Alcano in a press conference yesterday at the Infinitea in City Times Square in Mandaue City.

Tillor, who just shifted to triathlon from running, feels this is going to be a tough test. “A lot of marathoners have shifted to triathlon. It’s like giving yourself an upgraded challenge, but we still do long runs with the running club, and we still consider running as a cross train for triathlon,” said Tillor, who will compete in the Filipino elite category.

Tillor is expected to go up against some of the country’s best triathletes such as August Benedicto, fellow Cebuano John Philip Dueñas, Kristiane Lim, Banjo Norte and Paul Jumamil.

Read Next
ALL GEARED UP