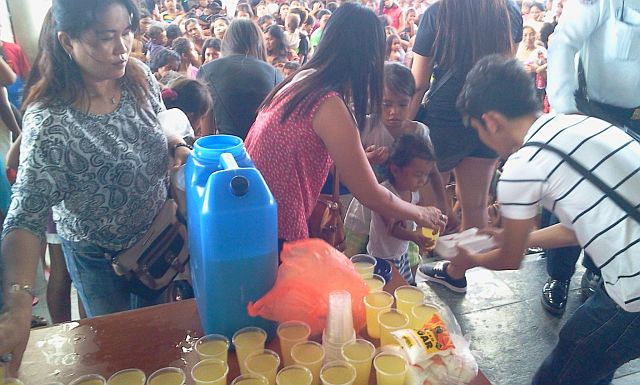 Some 300 children from Barangays Mantuyong and Guizo in Mandaue City who are temporarily staying at an evacuation center in the Cebu International Convention Center (CICC) after being victimized by the fire have benefited from the feeding program conducted by Bisdak Pride Inc., in partnership with the Mandaue City government and students of the University of San Carlos.

The organizers also conducted a seminar on Human Immuno Virus (HIV) last Sunday at the CIDD for the adults to know the risks and consequences of contracting HIV.

Roxanne Doron, executive director of Lesbian, Gay, Bisexual and Transgender (LGBT) group Bisdak Pride Inc., said they would be giving free HIV screening to adults who are willing to undergo the test in the coming weeks after receiving reports that the so-called karton girls, a group of prostitutes that lay on empty cardboard boxes, are back in business.

The term “karton girls” was coined after the empty cardboard boxes that served as beds for those who wanted to avail of the sexual services of young prostitutes in the dark alleys of the North Reclamation Area (NRA) nearly 10 years ago.

In exchange for sexual favor, a customer was charged between P50 and P250. An extra P10 to P20 was added as rental for the cardboards plus P50 for the “bantay” or guard.

On orders of the Mandaue City government then, police rounded up suspected prostitutes and conducted nightly patrols in the area until it was declared free from the illicit sexual trade that was taking place there.

Following reports of its resurgence, Mayor Gabriel Luis “Luigi” Quisumbing on Wednesday ordered the City Social Welfare and Services (CSWS) to check on claims that rampant prostitution is now back at the NRA.

During last Sunday’s activity, the organizers also distributed condoms to the fire evacuees aged 18 years old and above. Doron said they were planning to give more condoms in the coming weeks.

He said Central Visayas ranks fourth among the regions in the country that have the highest number of HIV cases, next to the National Capital Region (first), Region 4A (second) and Region 3 (third).

Brianne Borling, president of USC Medics, an organization of nursing and pharmacology students, said they conducted the HIV seminar to prepare the adults for the HIV screening.

The feeding program was handled by Accounting Technology student John Rhaniel Vañacia and his two classmates.

Vañacia shouldered the cost of packed meals that were distributed to the children. He said his mom always reminds him to share whatever blessings he receives. He said he saved a portion of his monthly allotment sent by his mother, who is working abroad, and gave it to the less fortunate individuals.

Aside from the packed meals, the children also received packs of sweets.

Read Next
‘BEN-HUR’: Dreadful remake of a classic tale