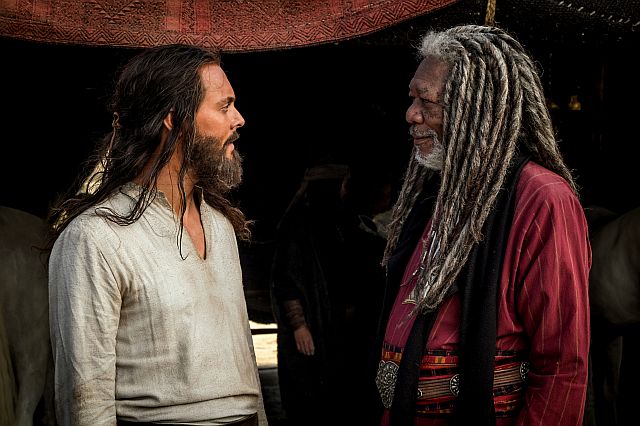 ANOTHER pointless remake of one of the most classic Hollywood movies ever made comes your way in “Ben-Hur.”

Directed by Timur Bekmanbetova, a Russian-Kazakh film director, best known for the never-seen “supernatural” vampire franchise “Nochnoy Dozor” was tapped for this remake.

He should not have quit his day job.

The directing is choppy as well as the story of “Judah Ben-Hur (Jack Huston), a prince who is falsely accused of treason by his adopted brother Messala (Toby Kebbell from last year’s disastrous and dreadful “Fantastic Four”), an officer in the Roman army.

Stripped of his title, separated from his family and the woman he loves (Nazanin Boniadi), Judah is forced into slavery.

After years at sea, Judah returns to his homeland to seek revenge but finds redemption. Based on Lew Wallace’s timeless novel, Ben-Hur: A Tale of the Christ. Also starring Morgan Freeman and Rodrigo Santoro.”

Let’s stop here for a second.

Although not quite as bad as last week’s “The BGF,” “Ben-Hur” is a story that centers on the most massive chariot race ever placed onto film-ostensibly in Rome’s Coliseum—and is a race to either personal freedom or death. It is also the hallmark of this film and for this alone, I can
recommend it. 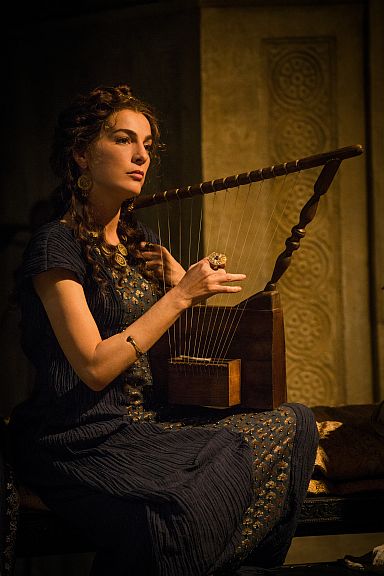 Ayelet Zurer as Naomi Ben-Hur in a scene from “Ben-Hur.” (Philippe Antonello/Paramount Pictures via AP)

Just take a pillow along with you for the rest of the movie so you can get some good sleep.

You’ll thank me for it.

Come on now. How many movies or TV films are being pumped out to go after the so-called “religious” market? Far too many. This is the fifth film adaptation of Ben-Hur taken from Wallace’s

Ben-Hur novel and is being billed as either a “reimagining” or “new interpretation.”

In Hollywoodspeak this could be anything from simply altering history by freeing Jesus as he carried his cross to Golgotha—or going back to the same place in time with a “Hot Tub Time Machine” to free Jesus from his Roman captors, all the while firing green ray beams.

The plot has this newest Ben-Hur surviving years of slavery under the Romans and attempts to get revenge by challenging his adoptive brother in a grand chariot race while being forever changed after a series of encounters with Jesus of Nazareth.

You just can’t make this stuff up folks.

I certainly am not trying to be flippant about such a serious subject as the Crucifixion of the Christ—just pointing out that you should not get too excited about this version of Ben-Hur (filmed on location in Italy) who encounters Jesus more than once. You too will walk away expecting to read about these “encounters” somewhere in the King James Version of the Bible.

For the life of me, I just can’t find the scriptural reference.

Which is why Bekmanbetova is pretty much playing with liquid nitroglycerin with Ben-Hur which steps all over its classic and much better film adaptation from 1959. Directed by William Wyler, Ben-Hur stared the incredible Charlton Heston in the leading role with the equally amazing Stephen Boyd as his wayward brother.

At the time, Ben-Hur had the largest film budget in history ($15 million) as well as the largest sets ever constructed for any film … and the thrilling five-minute chariot race, one of film history’s most famous sequences, was made without any of today’s fancy computer graphics. 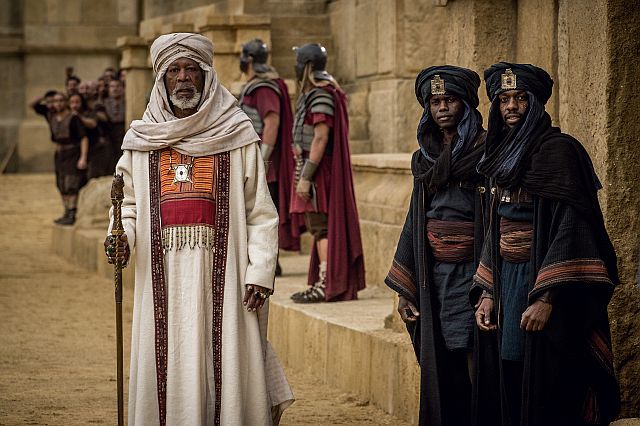 Morgan Freeman as Ilderim (left) in a scene from “Ben-Hur.”

Filming of “Ben-Hur” was done nearly 14 hours a day with a workshop employing more than 200 artists and ultimately won 11 Academy Awards, including Best Picture, Best Director (Wyler), Best Actor (Heston) and the list goes on.

You will not find that level of quality in today’s remake.

Bekmanbetova is disordered and probably is expecting movie goers to check their frontal lobes at the ticket counter as this film slowly plods along from Ben-Hur’s capture, to his years in slavery, to the massive chariot race which again I will defer that it alone is worth the price of admission.

Instead of losing your hard-earned pesos on this dreadful remake, go search out and find Charlton Heston and a fabulous cast and crew in the real Ben-Hur.

Eleven Academy Awards speaks for itself.