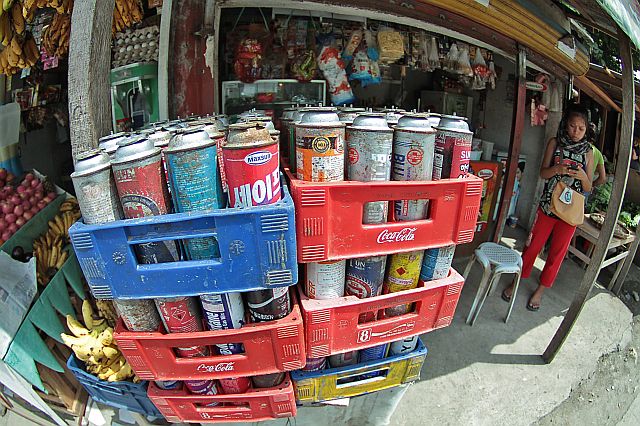 Sari-sari stores in Barangay Pajac, Lapu-Lapu City still continue to sell refilled butane canisters which endanger public safety. If the rust on the canisters is an indication, it would seem that these containers should have already found their way into the trash can instead of sari-sari stores for their sale and distribution. (CDN PHOTO/FERDINAND EDRALIN))

It all started with three fire incidents last year that were all sparked by refilled butane canisters.

Then followed by another blaze last week in the densely populated community of Sitio Arca, Barangay Pusok, Lapu-Lapu City which was fanned by exploding butane canisters filled with liquified petroleum gas (LPG).

The four refilling-related fires in Lapu-Lapu City, within a period of one year, proved to be too much for Lapu-Lapu City officials who now vow to strictly enforce a local ordinance prohibiting the distribution, sale and use of LPG-refilled butane canisters in the city beginning this September.

Radaza ordered village chiefs in the city’s 30 barangays to identify those engaged in the business of refilling butane canisters in their respective areas and submit names to her office.

Under the ordinance, barangay officials in coordination with the Department of Trade and Industry (DTI) are tasked to monitor sari-sari stores and commercial establishments to check on whether refilled butane canisters are being sold in them.

In coordination with the Department of Energy (DOE), the City Traffic Management System (CTMS) will also begin to impound vehicles found transporting refilled butane canisters. A traffic citation will be issued to the violator with fines also ranging from P3,000 to P5,000.

Section 4 of the new Lapu-Lapu City ordinance declares it unlawful for any person or entity  to refill, distribute, sell and even use LPG refilled butane canisters.
Radaza said the city will not compromise safety over convenience.

The ordinance sponsored by Councilors Alexander Gestopa and Eduardo Patalinghug noted that many households in the city preferred butane stored in small canisters because this was cheaper than LPG; however, this has become a major issue needing public awareness because the practice of refilling the canisters with LPG jeopardizes public safety.

The ordinance was passed last March in time for the country’s celebration of Fire Prevention Month.

Last week, a fire in Barangay Pusok burned down 130 houses and displaced about 3,000 individuals.

Though it started with a lighted candle, the flames were fanned by butane canisters which exploded in the densely populated area.

He explained that butane canisters are meant to only be used one time and refilling them with LPG would be dangerous because it is more pressurized, meaning more likely to blow up.