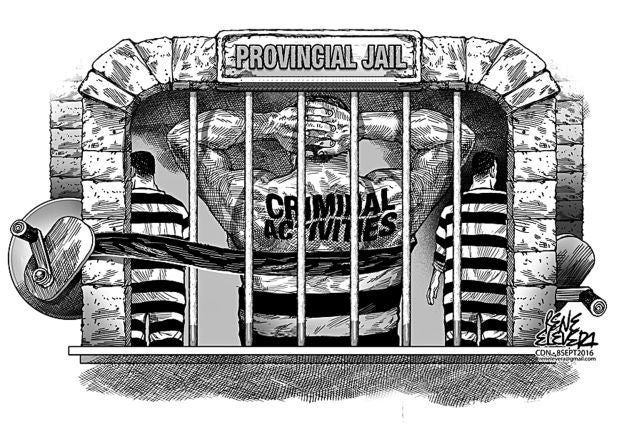 The reinstatement of the visitation privileges comes even as the inmates have yet to produce information regarding the whereabouts of one inmate who escaped by posing as a visitor complete with ID cards.

It is understandable that the reinstatement was done for humane reasons; but the precaution taken by the provincial government to prohibit physical contact between visitors and inmates, while seemingly harsh, is understandable in light of the recent inmate escape and the raid that produced sizable drug caches, weapons and cash that ran up to hundreds of thousands, even millions of pesos.

If the families of the inmates complain about this restriction, they only have to blame those inside the jail who made it possible for an inmate to escape.

This is not to absolve the jail authorities for failing in their job of securing the provincial jail not only from escapees but also from keeping out the inflow and outflow of drugs, weapons, cash proceeds and devices that enable a lot of inmates to continue their illegal drug and cyberpornography trade unabated and safe within the stinking walls of jail.

Which brings us to reports of alleged plans to spring Alvaro “Barok” Alvaro from prison and the blame game between Garcia and Davide. Both officials have their points, but ultimately, both of them are to blame for the dismal condition and the poor security of the Cebu Provincial Detention and Rehabilitation Center (CPDRC).

Both officials have yet to build a better, more secure prison to house more than a thousand inmates who are packed inside tighter than sardines in a can. As one columnist said, it’s better for Garcia to ask the national government agencies concerned to investigate the country’s prisons and initiate reforms in them rather than focus solely on the CPDRC.

As the governor, Davide should also do a better job of securing the provincial jail after his choice of jail consultant, Marco Toral, proved to be not only inadequate but also questionable for how he instituted programs that — while helpful to some like the in-house bakery — have not curbed abuse and corruption inside the CPDRC.

For now, it’s best to impose restrictions on inmates until the drugs and other illegal activities have been eliminated. It is a near-impossible task to be sure because one is dealing with people hardened by years of staying locked up within the fetid concrete walls of prison.

The families may complain, but until Davide makes sure that every inmate in jail toes the line, these policies will have to stay on. At the same time, the provincial government should seriously consider building a bigger jail.