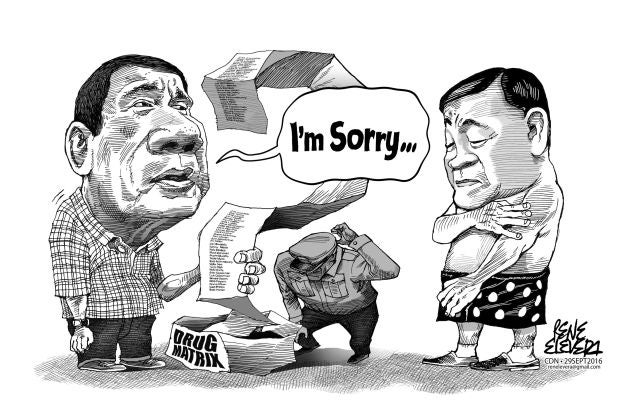 President Rodrigo Duterte’s apology to Pangasinan Rep. Amado T. Espino Jr. and other officials whom he admitted to have been mistakenly included in the second watch list of suspected drug dealers/coddlers during a visit to a shabu factory in Pampanga province proved that not everything he declares in his addresses to the public should be taken as gospel truth.

Lest he blame the media anew for this debacle, let us remember for a time that it was he who promised to fully resolve the drug menace in four to six months this year, and that he sought for another six months extension to solve the problem.

Did anyone realistically expect that Duterte’s self-described relentless war on illegal drugs won’t show any flaws whatsoever and that all this criticism from the US and the international community about the extrajudicial killings resulting from his war doesn’t have any semblance of legitimacy?

Whatever the reasons behind the mistakes committed in his second watch list, the President isn’t one to shy away from declaring full responsibility for it as he himself repeated time and again ad nauseum.

Would his admission of lapses in the drug matrix that he presented to the public help clear the names of those he identified publicly as drug coddlers, which included former Cebu City mayor Michael Rama?

Since they weren’t charged in court anyway, the President’s admission may be considered either as an acquittal or a definite clearing of their names. Exactly how foolproof is the President’s drug matrix and watch list anyway?

Duterte’s admission of lapses should merit at least a Congress inquiry on the methods and processes used by the police and the Department of Justice in identifying, verifying and double-checking those with alleged drug links.

If anything, the President’s admission may be taken as one of the several points of reference by a visiting United Nations (UN) contingent assigned to investigate the extrajudicial killings that claimed mostly drug suspects to determine if the Duterte administration is doing its job right in cracking down on criminals.

Alas, the Congress is too busy building a case against Sen. Leila De Lima and discrediting self-confessed Davao City Death Squad member Edgar Matobato to bother doing even a side investigation into the President’s drug matrix and watch list.

If anything, what’s also happening right now is a crackdown on the President’s critics and denunciation of anyone and any group who dares oppose, let alone question, the administration’s war on illegal drugs.

We hope the President and his people would do a better job in identifying and pursuing those identified as drug dealers and protectors. Otherwise, this watch list and drug matrix would be devalued as well and be considered a witch hunt.

Read Next
CEAP on its 75th year