A COUP VS DUTERTE? 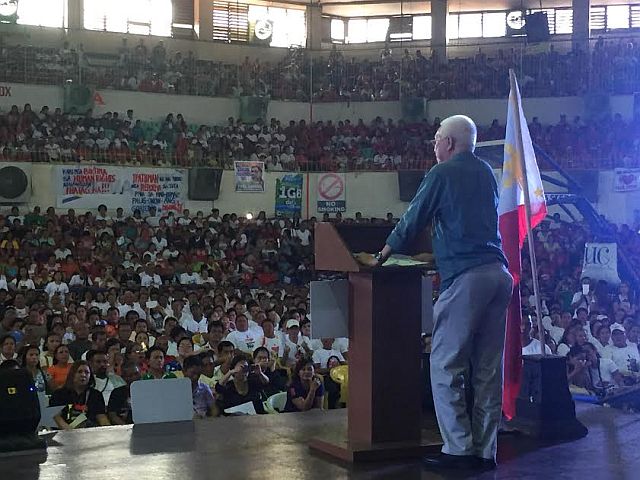 Cabinet Secretary Leoncio “Jun” Evasco speaks before over 8,000 supporters of President Rodrigo Duterte who have joined Kilusan Pagbabago in an oath-taking rite he presided at the 5,000-capacity Cebu Coliseum. on Saturday, Oct 1, 2016.
(CONTRIBUTED PHOTO / PR WORKS)

Amid the growing dissatisfaction of various groups over the policies and pronouncements of President Rodrigo Duterte, Cabinet Secretary Leoncio “Jun” Evasco Jr. said he will not be surprised if these people will stage a coup to unseat the President.

Evasco said people whose interests are no longer given attention to would naturally be angry at the President.

“Daghan baya karon ang wala kauyon sa pamaagi ni Duterte. Sila nga ang mga interes karon nga wala na mahatagan maoy nangasuko ni Duterte,” said Evasco while in a visit in Cebu yesterday. (There are so many of them now who don’t agree with Duterte’s ways. These are interest groups who are not getting what they want and are angry with Duterte.)

Among those he cited who might hold a grudge against the president are military generals included in Duterte’s drug matrix, businessmen who will be affected by the government’s drive against contractualization and business owners who have interests in the US.

“Do you think they will be happy? All of these who will be dislocated by Duterte will look for an armed component to throw him out of power one of these days,” he said in a press conference in Cebu City on Saturday.

“That’s what you call coup d’etat. But I tell you, if you are thinking and planning to do that, I will tell you (that) you will fail,” he added.

Evasco was in Cebu to attend the province-wide launching of Kilusang Pagbabago, a nationwide initiative in response to President Duterte’s call for participatory governance by consolidating all his forces into an organized mass movement.

At least 8,000 Duterte supporters from Cebu took oath as KP members at the Cebu Coliseum.

The government official said the KP is a reflection of the people’s support for Duterte and his popularity among them.

Evasco emphasized that while the role of the KP is to defend the republic in times of calamity and disaster, it will also be the defender of the republic and the gains of the administration in times of destabilization.

Despite criticisms on Duterte’s war against drugs, he said most Filipinos are actually pleased with its results, so a coup’s success would be unlikely.

“A coup will only be possible if there is mass anger toward the administration. But if people are contented because government services are reaching their doorsteps and government is responding to their basic needs, (a coup will fail),” said Evasco.

He added that people aspire for a drug-free country and that they, too, are in favor of killing drug lords and peddlers.

In the presidential elections in May this year, more than 16 million Filipinos voted for Duterte.

Since July, the start of Duterte’s six-year term, up to present, police have already recorded over 2,400 deaths related to the President’s drug war in the whole country.

“Some groups are complaining that many people aren’t batting an eye all who have been killed, but they don’t know they are just in favor of it,” said Evasco.

Evasco said he is an advocate of human rights and that it is correct at all times. But advocating for human rights when the five pillars of justice have collapsed would be an unpopular position.

“If you do this, it will be perceived that you are on the criminal’s side,” Evasco said.

President Duterte, while in Hanoi on Sept. 28, also revealed that he received reports that the US Central Intelligence Agency (CIA) would want him dead.

He made the remarks in his speech before hundreds of Vietnam-based Filipinos gathered at the Intercontinental Hotel.

He was then discussing how he would not go to war against China over the territorial dispute in the South China Sea.

In the same speech, Duterte promised to end the Philippines’ joint military exercises with the United States.

Yesterday, Associated Press reported that the mood in Washington toward the Philippines has been hardening as the body count mounts in the country’s deadly war on drugs and the President’s rhetoric plumbs new depths.

Influential US lawmakers were warning that the extrajudicial killings in the drug war, with President Duterte on Friday comparing it to the Holocaust, could affect American aid.

And while the Obama administration maintains that its 65-year-old alliance with the Philippines remains “ironclad,” a senior US diplomat is cautioning Duterte against more anti-US posturing.

“I think it would be a serious mistake in a democratic country like the Philippines to underestimate the power of the public’s affinity for the US. That’s people power,” Assistant Secretary of State Daniel Russel told the AP.

Russel did not draw a direct comparison, but past Philippine presidents have been toppled by popular protests dubbed “people power,” including former dictator Ferdinand Marcos, who was ousted in 1986.

Duterte has bristled at US criticism of the drug war and repeatedly spoken about dialing back security cooperation — although he says he will maintain the alliance. This week, he said that joint military exercises of Filipino and American troops scheduled for next week in the Philippines will be the last such drills.

His foreign secretary quickly said the decision was not final. Such a step would impede Washington’s plans to expand the footprint of US forces in Southeast Asia to counter China.

The previous Philippine government signed an agreement to give the US forces access to five Philippine military bases. That reflected Manila’s anxiety over the territorial ambitions of China with which it has competing claims in the disputed South China Sea.

“If he followed through on this pledge, it would be devastating to alliance management,” said Gregory Poling, a fellow with the Southeast Asia program at the Center for Strategic Studies. “How does one sustain a military alliance if your militaries don’t exercise together?”

The Obama administration has consistently played down the significance of such pronouncements from Duterte, which have typically been walked back by other Philippines officials.

On Friday, the Philippine leader said that Adolf Hitler had killed three million Jews and that he himself would be “happy to slaughter” three million addicts.

More than 3,000 people have died in the crackdown on drug pushers and users since Duterte took office three months ago.

In Hawaii to meet with Southeast Asian defense ministers, Defense Secretary Ash Carter hinted at US impatience with the Philippine government over Duterte’s remarks. “Just speaking personally for myself, I find these comments deeply troubling,” Carter said. A day earlier, he had described the US relationship with the Philippines as
“ironclad.”

The State Department has tended to parry questions about Duterte’s outbursts.

“It is reprehensible and, frankly, disgusting that a democratically elected leader is talking about the mass murder of his own people, with Hitler’s Holocaust as his inspiration, no less,” he said.

Cardin and Democratic Sen. Patrick Leahy, author of a law that prohibits US a ssistance to foreign security forces that commit gross human rights abuses, took to the Senate floor this week to decry the drug war. They accused Duterte of terrorizing Filipinos through his drug war and endorsing “mass murder.”

Leahy, a senior figure on the Senate Appropriations Committee, said because of the “systemic challenges” in the Philippines, it may be necessary to consider further conditions on aid until the Duterte government “demonstrates a commitment to the rule of law.”

The aid Manila gets from Washington is substantial — although it may pale next to the investment that could potentially flow from regional economic powerhouse China, where
Duterte is expected to visit in October in a bid to improve ties with Beijing.

The Philippines received about $175 million in US development assistance in fiscal year 2015 and $50 million in foreign military financing. In 2016, it has gotten $75 million for counterterrorism and maritime security.

Since 2011, it has received three decommissioned US Coast Guard cutters to bolster its meager navy.

Russel said Thursday it was no surprise that senior lawmakers were looking to monitor where US assistance funds were going, given the “collateral damage” from the drug war.

But he added it’s premature to impose restrictions on aid.

He stressed Washington’s desire to work with Duterte. He said the US-Philippine relationship — rooted in a 1951 mutual defense treaty — remains very popular in the Southeast Asian country, notwithstanding Duterte’s repeated references to rights abuses committed a century ago under American colonial rule.

“All politicians have to be responsive to both the mainstream public attitude and the national security and economic interests of their country. All of that leads to continued close ties between our two countries,” Russel said.