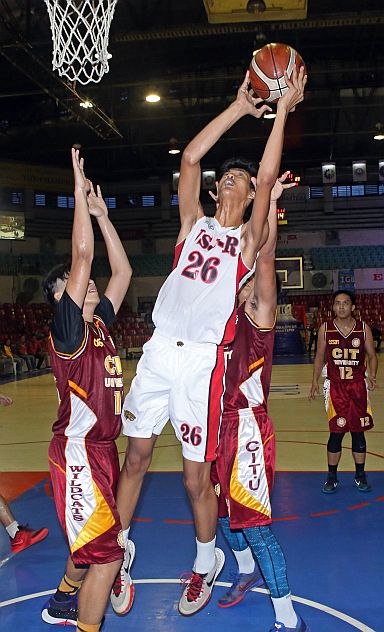 THEY struggled all season long but in the bigger stage, the Cebu Institute of Technology-University (CIT-U) showed some heart as they bucked outright elimination with a gutsy 68-66 win over the twice-to-beat University of San Jose-Recoletos (USJ-R) Jaguars last night in the quarterfinal round of the 16th Cesafi men’s basketball tournament at the Cebu Coliseum.

It was only CIT–U’s second win in the season and what a time to come for the Wildcats to step up as they look to make it two in a row when the two teams collide in a
sudden-death match at 5 p.m. today at the same venue.

Winner in today’s all-important match will advance to the single round-robin semifinal phase to join the Southwestern University Cobras, University of the Visayas Green Lancers and defending champions University of San Carlos Warriors.

Basketball enthusiasts will get a huge treat as the sudden-death duel is free of charge.

As if the twice-to-win handicap was not critical enough, CIT-U played without shooter Steve Bucao, who was slapped with a one-game suspension for skipping the three-point shootout in last Sunday’s All-Star festivities.

The seventh-ranked Wildcats found a way to survive behind Wilkins Sanchez, Marlo Pono, Primo Alicaway, and Kenneth Ariar, who all scored in double figures for a combined 58 points.

USJ-R, the number two seed in the playoffs, took a 62-60 lead late in the game but Pono hit a three-pointer and added a split free throw that handed CIT-U the lead, 64-60.

USJ-R was within 66-68 and had the opportunity to steal the win when Pono missed two free throws with 13.2 seconds left.

Jaybie Mantila, however, couldn’t save the Jaguars as he misfired a three-pointer at the buzzer.

Mantilla top scored for the Jaguars with 21 points.

Read Next
Jodi’s new film with JC and Marco