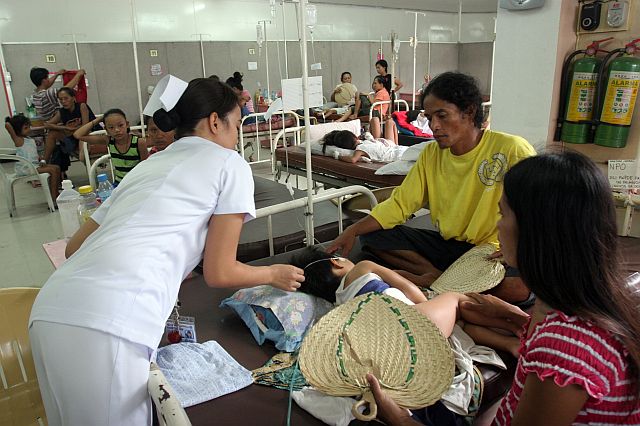 The Cebu City Council has declared a state of calamity as dengue cases continued to rise this year in what the council describes as “one of the deadliest plagues affecting Cebu City residents.”

With over 2,000 cases and close to two dozen deaths already recorded as of October 1 this year, city officials said that this was by far the highest number of cases monitored by city health officials in the last three years.

“This year shows an alarming increase in the number of dengue cases as compared to the last three years. Dengue still poses a great threat to the populace as it is one of the deadliest plagues affecting the Cebu City residents,” read the resolution approved during the council’s regular session, yesterday.

The resolution was authored by Councilors Mary Ann delos Santos and Dave Tumulak, the deputy mayors for health and police matters, respectively, in response to a recommendation by the City Health Department (CHD) to Mayor Tomas Osmeña.

In a letter to the mayor, City Health Officer Dr. Alma Corpin and City Dengue Coordinator Dr. Raymon Ogan said that 23 people have died in the city due to dengue while a total of 2,089 cases were also recorded from January to October 1 this year.

(A separate monitoring report by the Regional Epidemiological and Surveillance Unit (Resu-7) of the Department of Health (DOH), however, placed the number at 2,243 cases and 13 deaths as of October 8.)

“Anti-dengue activities are presently being undertaken in the identified barangays with the highest cases with the aim to prevent and control the spread of dengue infection, provide proper and immediate treatment and care to those affected thus preventing further loss of life,” read the CHD’s recommendation to the mayor.

According to Tumulak, the declaration will pave the way for the city to access its calamity funds so that more anti-dengue related activities can be conducted.

This will also prompt a massive information drive in the city’s 80 barangays with the support of CHD personnel.

“If there is a necessity to utilized the funds for disaster and the Pagcor funds, they can utilize it. But as of this time, there’s still existing funds for CHD,” Tumulak said.

He also appealed for residents to ensure that there were no nesting areas for mosquitoes in their homes by cleaning surroundings of any stagnant water.

City Hall encouraged residents to immediately go to the CHD or barangay health centers or hospitals for medical check-ups if any family member develops a fever which is a known symptom of dengue.

The city plans to purchase reagents so that a complete blood count can be conducted on those needing to be tested.

The city has not been conducting misting operations, said Tumulak, although other activities are being done by CHD to prevent the spread of dengue such as canal clean-ups and massive “curtain impregnation.”

A report from the Department of Health (DOH) Regional Epidemiological and Surveillance Unit (Resu-7) showed Cebu City having the highest number of recorded dengue cases among all cities and towns in Central Visayas with 2,248 cases and 13 deaths reported from January 1 to October 8 this year.

Next to Cebu City, Mandaue City recorded the highest number of dengue cases among towns and cities in the region with 724 cases and 14 deaths, according to the Resu-7 report.

Barangays Pagsabungan and Paknaan in that city were considered the hotspots.

As of October 8, 43 barangays from 10 towns and six cities in Cebu were listed by Resu-7 as dengue hotspots.

These are barangays Madridejos and Valencia in Alegria; Guadalupe, Perrelos, Can-Asujan, Valladolid, and Poblacion I in Carcar; San Jose Poblacion in Catmon; Nangka and Tayud in Consolacion; Tapilon in Daanbantayan; Mahawak in Medellin; Tunghaan in Minglanilla; Vito, Basdiot and Saavedro in Moalboal; Uling and Inayagan in Naga and barangays Sangat and San Isidro in San Fernando.

Meanwhile, other city barangays considered hotspots by the health department are Poblacion and Cabungahan in Danao City; Basak, Mactan, Pajo, Bankal, Ibo, Pusok and Agus in Lapu-Lapu City; Lagtang in Talisay City and barangays Media Once, Poblacion and Lutopan in Toledo City.

Resu-7 chief Dr. Rennan Cimafranca said despite the incidences of dengue in these areas, the figures were not enough to declare a province-wide outbreak.

Earlier, the Cebu provincial government declared the almost 140 percent increase or 5,000 recorded dengue cases in Cebu province from Jan. 1 to Sept. 24 this year as a disaster which subsequently led to a Provincial Board declaration of a province-wide dengue outbreak last Monday.