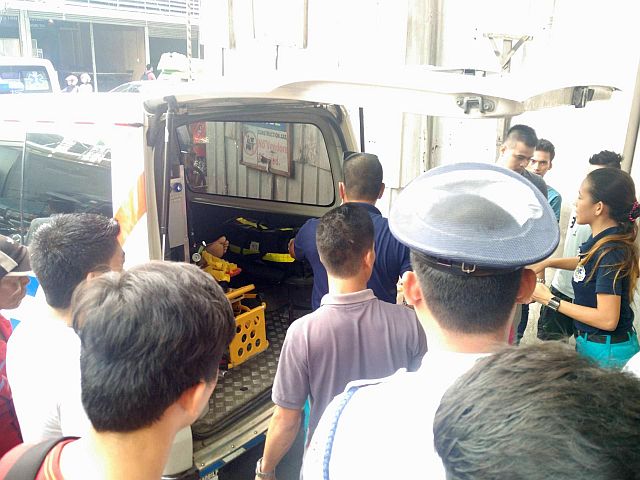 Police investigation showed that Udto was loading goods onto the cargo elevator from the fourth floor of Elizabeth Mall (E-Mall) located along Leon Kilat Street in Cebu City, when its cables snapped (CDN PHOTO/CHRISTIAN MANINGO).

THE delivery man of a cargo forwarding company died after he was crushed by the cargo elevator of a mall in Cebu City’s downtown area past 1 p.m. on Monday.

Udto is a native of Pangan-an Island, an islet off mainland Lapu-Lapu City and an employee of Airspeed Philippines Inc.

Police investigation showed that Udto was loading goods onto the cargo elevator from the fourth floor of Elizabeth Mall (E-Mall) located along Leon Kilat Street in Cebu City, when its cables snapped.

Udto’s body was pinned on the elevator door.

He was brought to the St. Vincent Hospital but was declared dead on arrival by the attending physician, Cristobal said.

Udto reportedly died of “cervical contortion.” His body has yet to be autopsied.

An official of the mall, who requested anonymity, said they are thoroughly investigating the incident.

“To be clear, the cargo elevator isn’t owned by the mall. It is owned by Gan Go Trading (a tenant of the establishment),” he told CDN over the phone.

“For now, on behalf of the company, we can’t issue an official statement yet. We still have a pending investigation on the matter. It’s not an incident that happens everyday. We need to conduct a thorough investigation,” he said.

The official said the mall management will shoulder the burial fees of the victim as well as the salary he could have received for two years.

In a statement sent to CDN, Augusto Go said he was still waiting for the complete report of the incident. Elizabeth Mall (Emall) is an affiliate of Go’s UC group.

“I don’t have the full report yet but our immediate concern was the life of that courier. We immediately sent him to the nearest hospital which happens to be Saint Vincent, an affiliate of our group,” he said.

“Initial report I got is that the homicide division of the Cebu City Police Office has ruled it as accidental. For now, we have extended all the help needed by the family from the hospital expenses, everything,” he added.

He said their lawyer and his wife Elizabeth Gan-Go, the mall manager, are on top of the situation and have been assisting the family. “We’ll conduct an investigation. We have an existing contract with a company maintaining the elevators,” Go said.