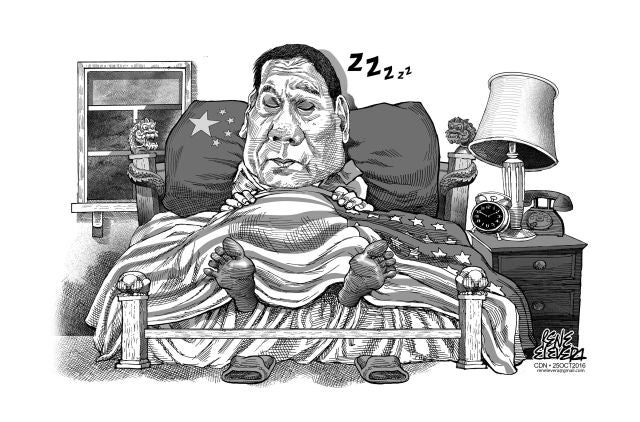 By this time, much has been said about President Rodrigo Duterte’s provocative statement about the Philippines breaking its military and economic ties with the US in a speech before Chinese officials during his visit in China last week.

On learning that a large, substantial number of Filipinos voiced concern and anxiety over his proclamation, President Duterte sought to assure them that his administration isn’t severing diplomatic ties with the US anytime soon.

“Thousands of Filipinos living there would kill me if I do,” the President said a week after he was cheered on by the Chinese officials, who were hoping to quell any protest over their expansionist moves in the Spratlys, as well as the communists and the Moro leaders who egged him on to make strong declarations about breaking away from the US in order to fast track the peace talks.

That is perhaps the primary reason behind Mr. Duterte’s proclamation of breaking military and economic ties with the US. It can be recalled that the President went into a lengthy discourse/sermon over the country’s dismal experience under US rule when it was a colony and long after it had acquired independence.

He said the Moro leaders told him that there could never be peace talks unless the US troops leave Mindanao. The President’s public declaration came amid the rally staged by anti-US militants out to seize Mr. Duterte’s statements about breaking away by demanding for the ouster of the US embassy.

That the President’s Cabinet had to work overtime to explain his declaration to worried investors both from the US and European Union — which was also a recipient of Mr. Duterte’s unbridled invectives for their criticism on his war against illegal drugs — and that President Duterte had to issue a clarification later on showed just how his supporters, the communists and the anti-US militants seriously underestimated public sentiment over his “breakaway from the US” statement.

Those critical of and anxious over Duterte’s breakaway remarks include workers and families who earn dollars and euros and send them to their families in the country, as well as business process outsourcing (BPO) companies that helped support the economy regardless of who’s in power, paid their taxes and did a whole lot more than just cause traffic congestion by marching on the streets.

Regardless of his constant harangues and the machinations of the cadre of communists and their allies in further denigrating PH-US ties, it remains to be seen if President Duterte can somehow change Filipino sentiment and mindset over the country’s cultural and social ties with America.

Considering that he himself acknowledged that he cannot afford to break the “diplomatic and social ties” due to the presence of hundreds of thousands of Filipinos in the US, President Duterte cannot afford to turn his back and renounce US-PH ties completely.